Chemo Round Nine. College Roommates and the Nurse who Cried

Chemo Round Nine included a visit from college roommates, lemon drop candy, and tears from a nurse. With permission from my 22 year-old son battling Hodgkin’s Lymphoma, I’m sharing our #danielkickscancer journey, desiring to educate, ease fears, make you more comfortable in conversations about cancer, know ways to help others, and mostly…  to proclaim firsthand that as we trust God, peace and joy are available no matter the circumstances. #heisworthytobetrusted 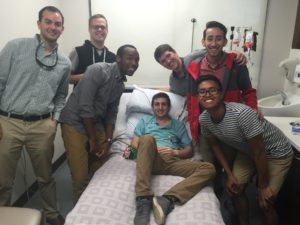 Just two weeks shy of graduating from the University of Florida, Daniel went into the infirmary with chest pains and the next day was told he had cancer. He immediately began one doctor’s visit after the next, graduated, and then chemo began that same month. #UFgrad  Today he’s 2/3rd of the way through his chemo treatment plan. Following the completion of chemo, he’ll have 22 rounds of proton therapy (radiation). 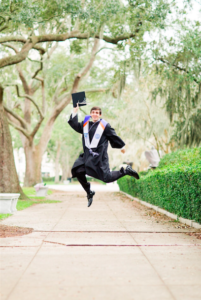 As is the routine prior to each chemo, Daniel’s blood is drawn and then at a later appointment the oncologist reports the results from the bloodwork.

I’ve shared that with you before, but here’s something I haven’t shared... Daniel pays for these appointments from his own account. This is made possible by a fundraiser begun by Dave Sullivan, a business/ leadership mentor at UF and supported by Daniel’s peers in the Heavener Leadership Challenge. You can read about it and donate as well at www.danielkickscancer.com. I’ll share more on medical costs in another post. I think you’ll find it interesting and helpful to know. I had no idea…and think I still don’t know the full scope. Just wait. But, for this post, I wanted to say a big THANK YOU to Dave Sullivan and the UF students who have played a role in this fundraiser. He is using the funds entirely for medical expenses. 🙂 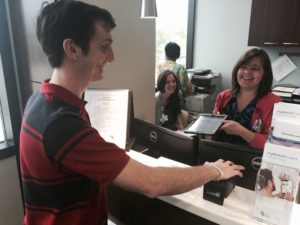 While we waited for the oncologist, a lady asked if our last name was Ellis. She had read a #danielkickscancer blogpost that a friend had shared on Facebook and recognized a photo of her oncologist… and now recognized Daniel. 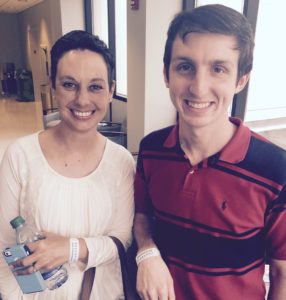 We had a sweet visit with her and were introduced to two of her support crew- her mother and daughter. She has continued to homeschool three children throughout chemo, radiation, and the side effects. She was an encouragement to both of us. It blessed my heart to be able to pray for her as we hugged goodbye. Would you pray for her right now? 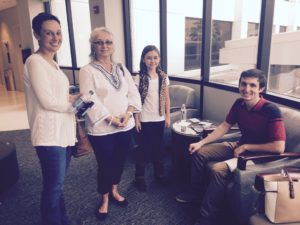 Dr. Zaiden and Daniel talked for a little while. He examined Daniel, answered questions, and also gave the disappointing news of a low white blood cell count. Chemo would go on as scheduled, but Neulasta would be given the day after chemo, to boost his numbers. Most likely this will happen every other chemo now. 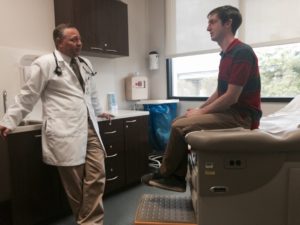 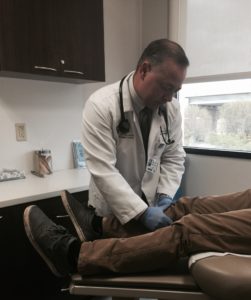 On the way to Chemo Round Nine, Daniel, his fiancée Gabi, and I stopped by Chick Fil A where they once again have given generously. We picked up 40 warm, delicious chocolate chip cookies to share with those on the chemo floor. 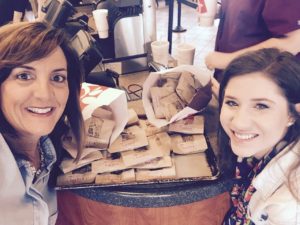 The cookie-sharing began in the waiting room. I mean, who can resist the tempting aroma of Chick Fil A chocolate chip cookies? #mamalike 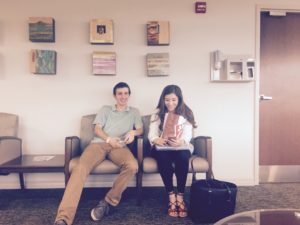 Prior to Daniel’s first chemo treatment, a port was surgically implanted. The port is the direct access to chemo entering his body, rather than through an IV in his arm. His chemotherapy infusion regimen consists of three anti-nausea medicines followed by four chemotherapy prescriptions known collectively as ABVD.

The smell of rubbing alcohol associated with cleaning the port brings on nausea. This time Daniel tried to combat it with a lemon drop candy in his mouth. He still gagged. 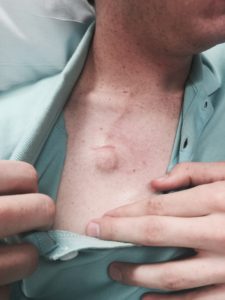 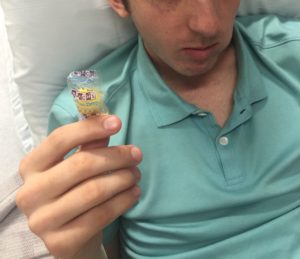 His port had a clot which required flushing it out prior to beginning the chemo. Once the IV dripping has begun, Daniel sits or lays there for about five hours while one prescription bag after another flows into his port. 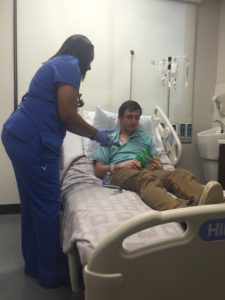 This time a carload of Daniel’s former housemates from the University of Florida drove a few hours to spend time with him during chemo. This meant a lot to Daniel, and I think it’s wonderful for these guys to experience what this is like as well as know the valuable principles in life of being there for friends – even in what many would view as an uncomfortable situation, not knowing what to say. They just sat and talked and laughed… just like normal. 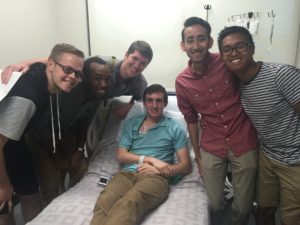 During Daniel’s years at UF, he lived in a “scholarship” house with sixteen guys. Students had to apply, be interviewed, have character and academic references, meet GPA and other criteria in order to be accepted into the Southern Scholarship Foundation (SSF) and receive the incredible opportunity to have room/board/food covered for just $1900 for the entire school year. (What what? I know. Amazing!) These housemates shared in the responsibilities of cooking, grocery shopping, cleaning, budgeting, and managing. Daniel served as a Vice President one year and President the next. Close friendships were formed among these guys. #SSF 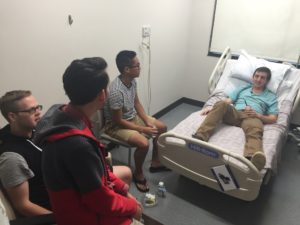 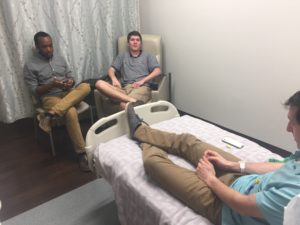 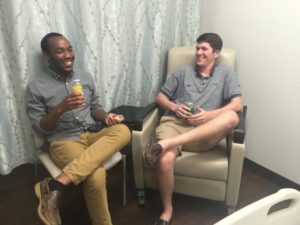 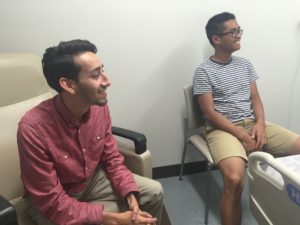 With just a few guests allowed in the room with him at one time, we also had lovely visits in the waiting room. One of the guys is considering medical school, and who knows what impact time spent here may have had on decision-making for his career. I’ve been intentional to visit these guys and cook dinner for them at least once each semester, and through that have gotten to know them and love them. On a different note…Isn’t this a beautiful view of Jacksonville.

Our time on the chemo floor has provided opportunities to meet new people. Each person has a journey with cancer and outside of cancer that makes her unique. This precious lady shared about her husband’s sudden death, the emotions experienced with losing her hair, a supportive group of friends, and she enthusiastically relayed the significance of her choosing a red turban headband. “Even though red’s not my favorite color, red means strong, powerful and bold, so I knew I wanted red.” #loveit  Would you pray for her as well. And, maybe send a text or call someone you know battling something… to encourage or to be a listening ear. 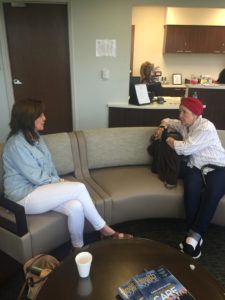 One of my favorite friends, who has also battled cancer, came to show support to both Daniel and me. Can I just tell you that this woman has made a tremendous impact on my life. She and her family opened their home weekly, for fourteen (maybe more?) years for families to homeschool together. We called it Legacy Co-op, desiring that our kids choose to carry on the legacy of living for Christ. Get this…some years there were over 50 kids doing school with moms teaching in nearly every room of her home. Now, nearly twenty years later, the “Legacy” still goes on. Her generosity and hospitality have influenced more families than she’ll ever know! If you know her, I’d love for you to leave a comment about her so everyone reading can also benefit from what you’ve learned from her. 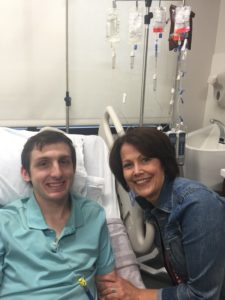 Daniel and our beautiful friend Peggy. Look at the IV bags collectively known as chemotherapy.

Daniel took photos of each of his visiting friends. Uh.. well… except Chris. He Snapchatted this photo during his chemo. I thought it would show you he’s still got a fun sense of humor. Plus, I wanted Chris to laugh. lol 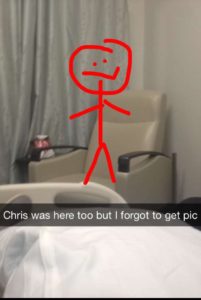 After his friends left, Gabi, her mother Paula, and I sat in the room while he rested. We had a grand time discussing wedding plans, venues, decorations, the dance routine Paula and I have for walking down the aisle, and more. (I was joking about dancing down the aisle.) A wedding date of October 22 has now been set. Wootothedoublehoo! 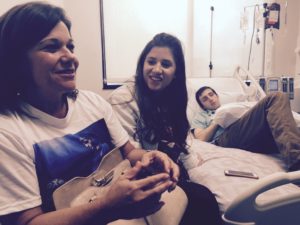 Have I ever told you that Daniel and Gabi “liked” each other since the eighth grade? Well, both of us moms – who are also neighbors -did our best to help navigate them through focusing on cultivating a deep friendship. The four of us went out for breakfast when Daniel and Gabi wanted to begin officially dating, when they were seniors in high school. That’s for another blog post, but suffice it to say for today, how beautiful is it that here we sit – the four of us together yet again- navigating through cancer. 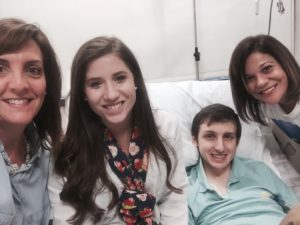 Probably THE most memorable moment of this day for Daniel, Gabi, and I will be what happened when a nurse watched the #danielkickscancer video that his sister Kelsey, a student at Liberty University had produced using footage captured during chemo while she was home on Spring Break a few weeks earlier.

As the nurse watched, she teared up, and then suddenly walked out to compose herself. We paused the four-minute video and waited. When she returned, she hugged me, got choked up again and whispered, “He’s just so strong.” 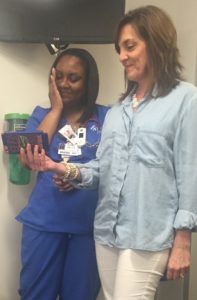 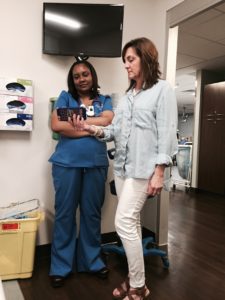 I’ve been told by some of the nursing staff that caring for younger patients can be especially emotional. Nurses play such a vital role in caring for the patients as well as easing their fears. Would you pray for the nurses you know?

On the way home from chemo it’s predictable that Daniel will crave something random and specific to eat. We’re in to fresh, organic eating… but… today, he wanted a Junior Bacon Cheeseburger from Wendy’s.

Here’s the scene upon arriving home after chemo. I’m preparing dinner. Daniel’s chilaxing. And Gabi’s writing a paper for a college class. Her professors have been very kind and accommodating, allowing her to travel back and forth to be a part of each chemo. Thank you! 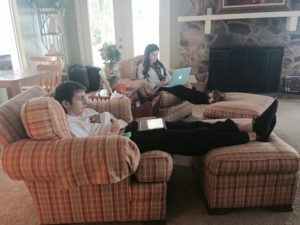 The next morning we went back to MD Anderson Cancer Center for Daniel to get Neulasta to help boost his white blood cell count. 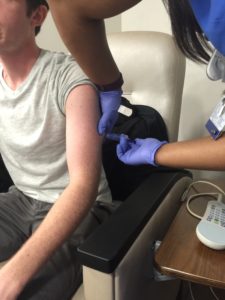 While there, a few other nurses asked to see the video that had made their friend cry the day before. They gathered around to watch via a phone. 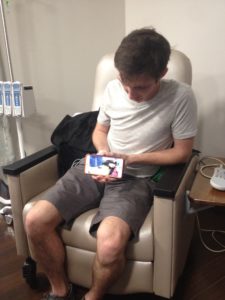 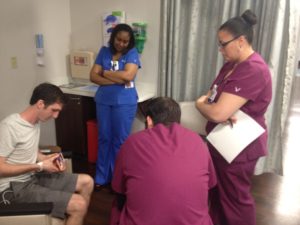 This time the Neulasta side effects of aches and pains in his joints and muscles weren’t nearly as bad thanks to Claritin Clear. 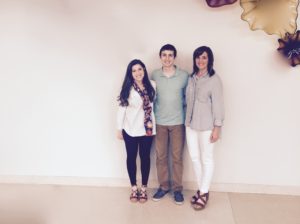 Share your thoughts. I’d love to share with my family how God can use one story to touch others in ways we can’t imagine. Love you.