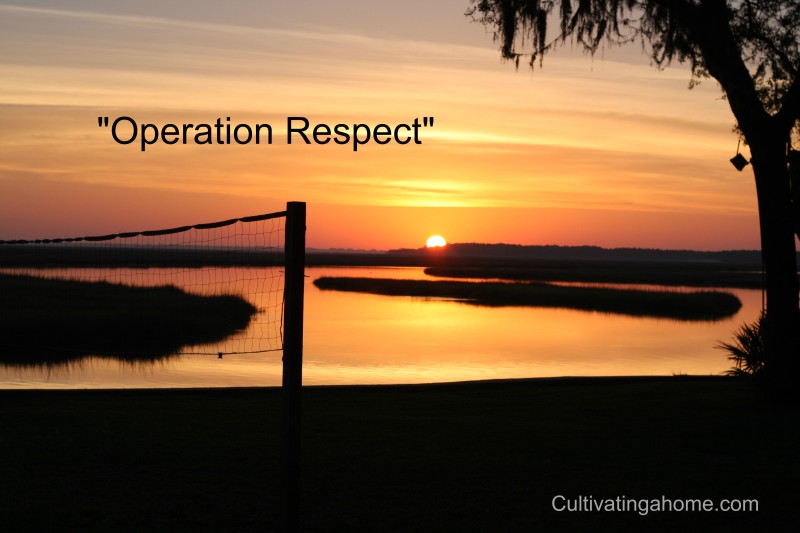 This is part three in a  mini-series on respecting and honoring fathers. You can click on the links below to read the two previous posts.

I’m sharing a personal story of being appalled at what I had unknowingly taught my kids about respecting their dad…and what we did about it.

Three things that we battle with are our tongue, temper, and tolerance.

I battle with my tongue, temper, and tolerance. I have seen my intolerance result in disrespectful reactions. When I don’t feel understood or feel devalued my tendency is to have a quick temper. An unbridled tongue and a uncontrolled temper broadcast a lack of self-control. Angry reactions include demanding rights, building ourselves up, ripping the other to shreds, expressing discontentment, harsh tones, and even speaking irretractable words that we don’t mean – just because we want to hurt the one hurting us.When I feel unappreciated or unworthy of certain treatment, I can snap back with the best of ’em. My sarcastic, quick wit was my method of standing up for myself in an effort to win or at least feel heard.

There was a specific point in time when I realized serious respect revamping was needed in our home.

It was when my oldest son was a middle schooler.

On this particular occasion my husband had written a chore list before leaving for work. Top of the list was cleaning the pool. Our son had spent an hour or so on this dreaded task, knowing he’d please his dad with the results. But, prior to my husband coming home, the leaves and those brown, curly things that fall from the trees covered the pool. My husband, without knowing the whole story, wrongfully assumed, and reacted sharply. This frustrated John III. Feeling falsely accused and undervalued, he lashed back. His quick retort and exasperated expression were like looking at myself in a mirror. They screamed of an intolerance of feeling misjudged and wanting to be heard. And, I totally agreed that my husband was wrong in this situation. (I did speak with him privately about this later.) But, my son! Oh my, no matter – he was still responsible for being respectful and returning wrong with kindness.

A serious overhaul was needed. In his heart. And in mine.

I quickly pulled my son aside to privately talk with him. Solemnly and gently, I shared the significance of what I had just witnessed. I asked forgiveness as I saw my very disrespectful attitude echoed in his reaction. We discussed the importance of honoring, of submission, dying to self, yielding rights,  and how to respond even when we were wrongfully accused. I humbly told him I had been wrong in what I had role-modeled in our home. I told him that he would most definitely see a marked difference in the respect level. I told him I was going to be intentional with my tone, my words, attitude, and the nonverbal signs. It was a healthy talk – owning my own sin, humbling myself before him, asking forgiveness, and asking my son to hold me accountable for a respectful response to my husband. We also talked about how to approach his dad later and discuss this, wanting my son to know how to respectfully stand up for himself-man to man.

I asked him if he wanted to also be accountable to me. He agreed. We came up with some silly hand gesture that would be our secret signal to quietly alert the other in times of disrespectful behavior. We agreed to simply walk in the background of the situation so the other would see our sign. The plan was when seeing it, to immediately stop the disrespectful behavior dead in our tracks. This meant, even if we were in the middle of “demanding our rights,” we would stop, acknowledge, and apologize.

We called this “Operation Respect.” It worked wonders in our home as we were mindful of treating Dad with respect.

I’m not gonna lie. My son busted me numerous times, and I, him on a few occasions. There was definitely a marked difference that began that day. This is a reenactment done willingly today by the two involved in this story for the benefit of the readers who may want a visual of our secret “Operation Respect” signal. LOL. John III is pretending to communicate, “Mom, you’re busted. Stop being disrespectful.”