Join us in the journey of #danielkickscancer… Today I’m sharing what chemo is like, how he’s doing, how to cultivating deeper friendships, and thoughts on honoring others.

I ain’t gonna lie. We’re getting mighty tired of all this. Just one more chemo after today… and then a few weeks break before beginning proton therapy. 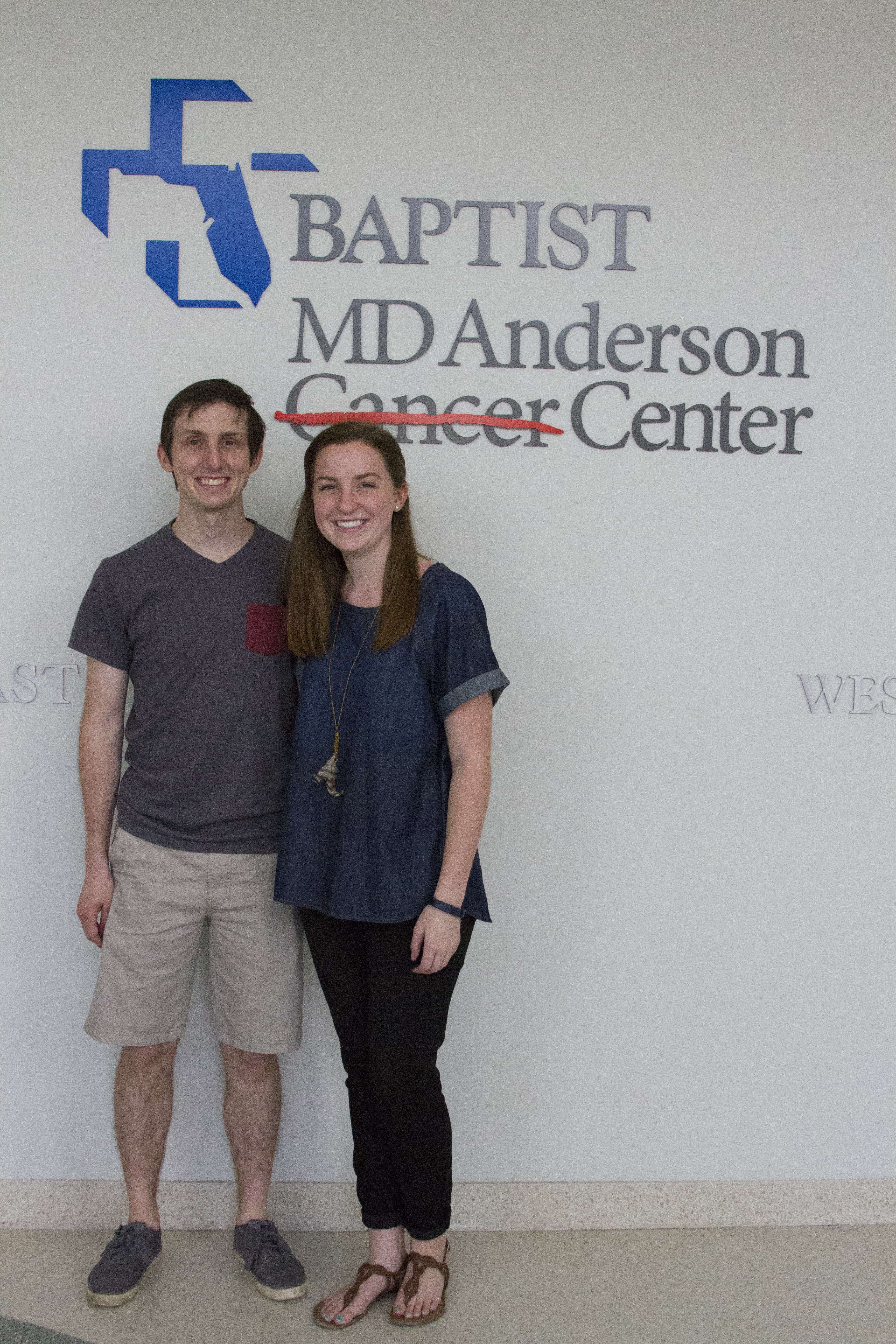 It’s nice to have his sister Kelsey home from college to experience the cancer/chemo journey with us. She’s a Strategic Communications major at Liberty University. Before she heads off to a summer internship in Puerto Rico, she’s working on a few videos about #danielkickscancer. She’s applying the info learned in her classes in making some videos about her brother’s cancer. You can watch #danielkickscancer  And a mock wedding one-song musical, filmed at MDAnderson Cancer Center (above), that uniquely celebrates the completion of Daniel’s twelfth and final chemo using props from his days in chemo. Seriously. You haven’t seen anything like it.

He’s plumb tired. He’s weak, lacks energy, and is consistently slightly nauseous…but not enough for him to take the high dose medication they initially prescribed. He got headaches from that and doesn’t want any part of it. This fatigue has him going to bed before 9:00 and waking up after noon…and even napping throughout the day. 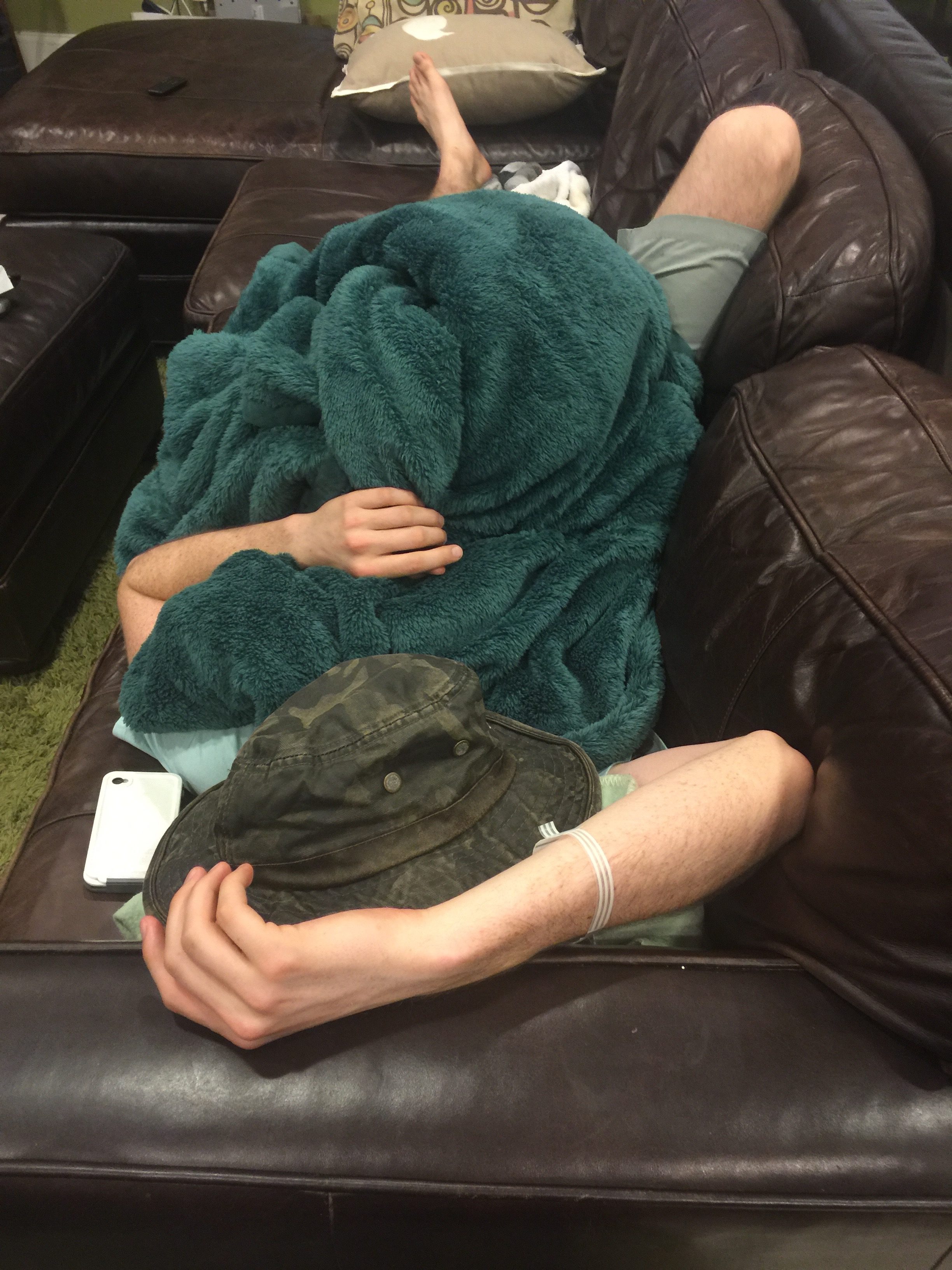 His oncologist, Dr. Zaiden, gave the results from his blood work. Daniel’s white blood cell count is verrry low. But surprisingly to us, he says no to boosting that count with a shot of Neulasta. 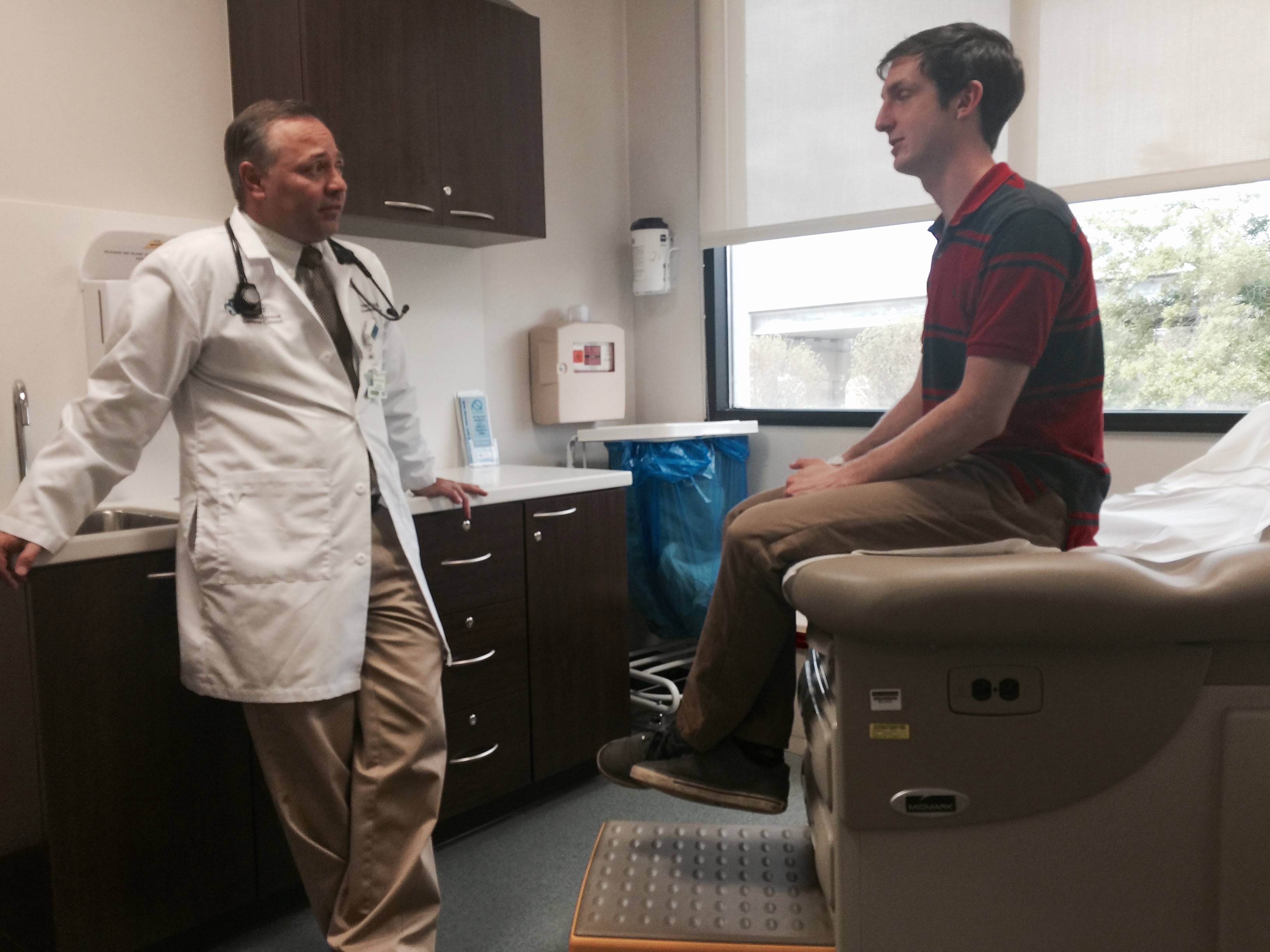 Weak immune system. Daniel’s one who’s rarely sick. But, over the past few weeks he was been treated for strep throat twice. Once with Amoxicillin. Then later with a shot of Penicillin, leaving him with a pain in the rump. He also had a cold and sore throat from nasal drainage that his immune system just couldn’t whip. 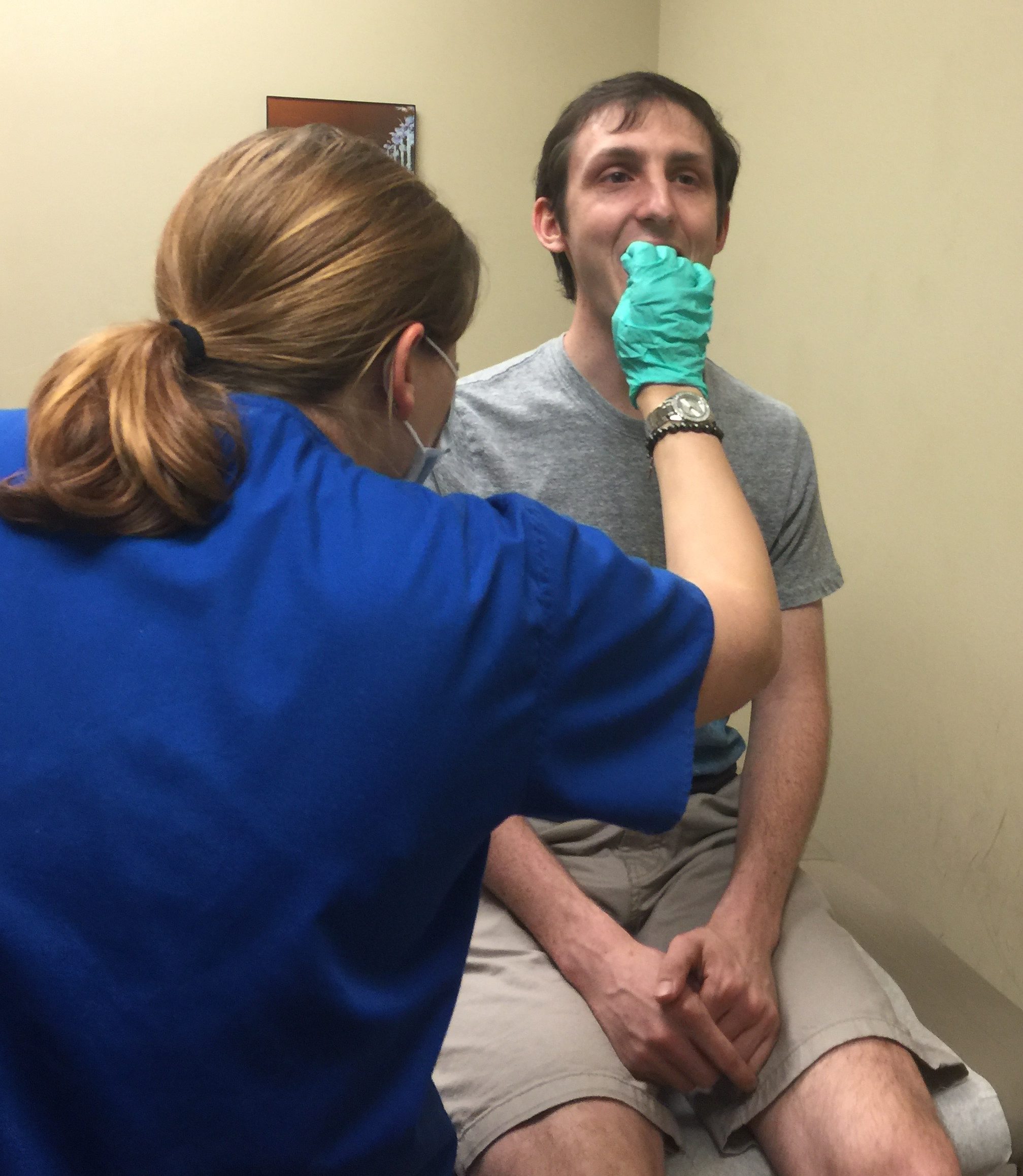 Daniel has been under house arrest, living a quarantined life these days… and will continue to do so until a few weeks following the completion of all of his chemo infusions. He’s going stir crazy and the one thing he looks forward to most is playing soccer. But, alas, he’s too weak AND that’s played in a group, so it will have to wait.

His chemotherapy treatment is called ABVD, each initial representing a particular medication. His treatments last 4-6 hours and are every other Wednesday.. for six months. 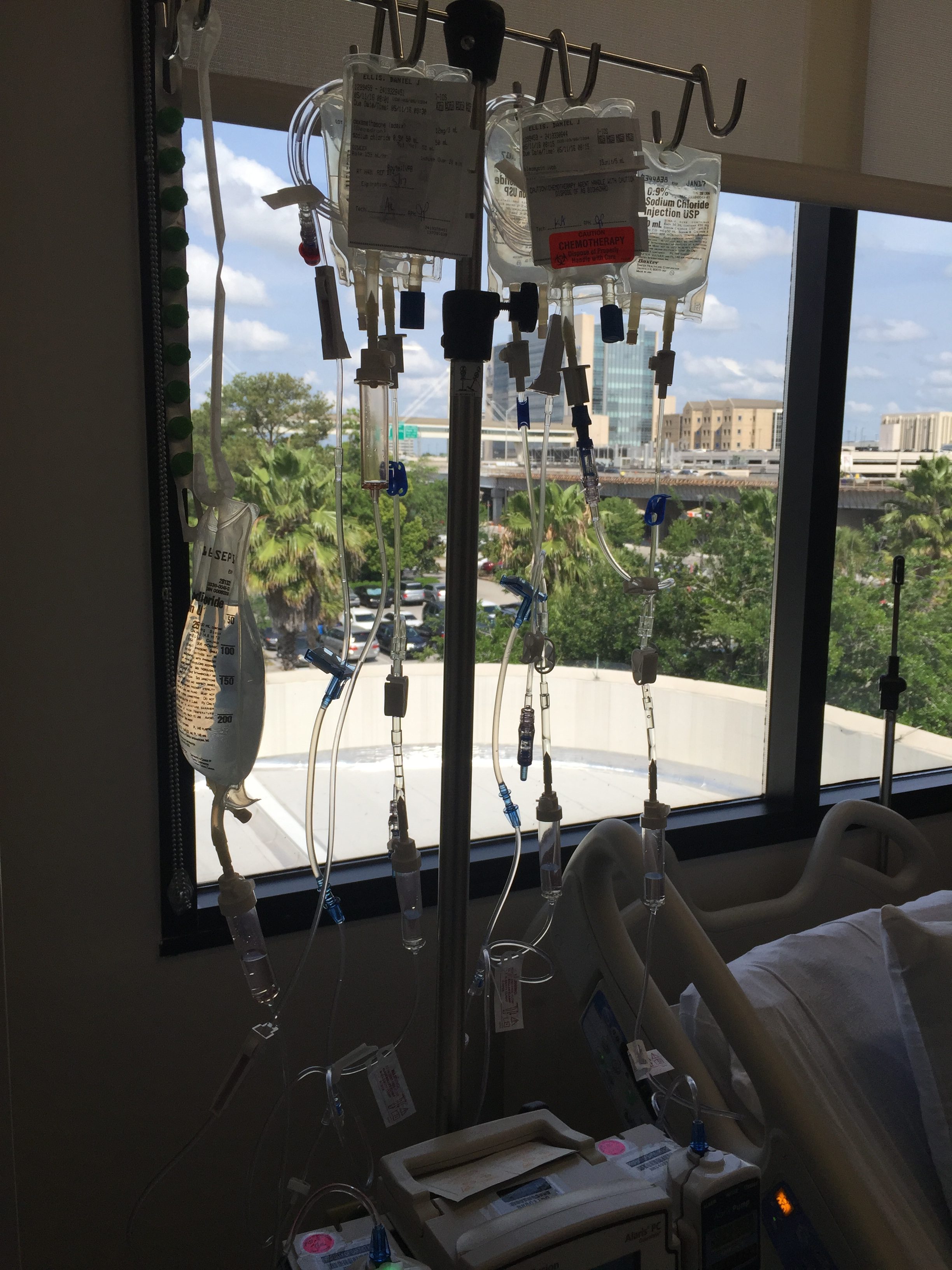 Part of the “chemotherapy infusion” process is ensuring there is a good blood flow return. Daniel really appreciated the skill and efficiency of this nurse and the visit from his future father-in-law Sandy. 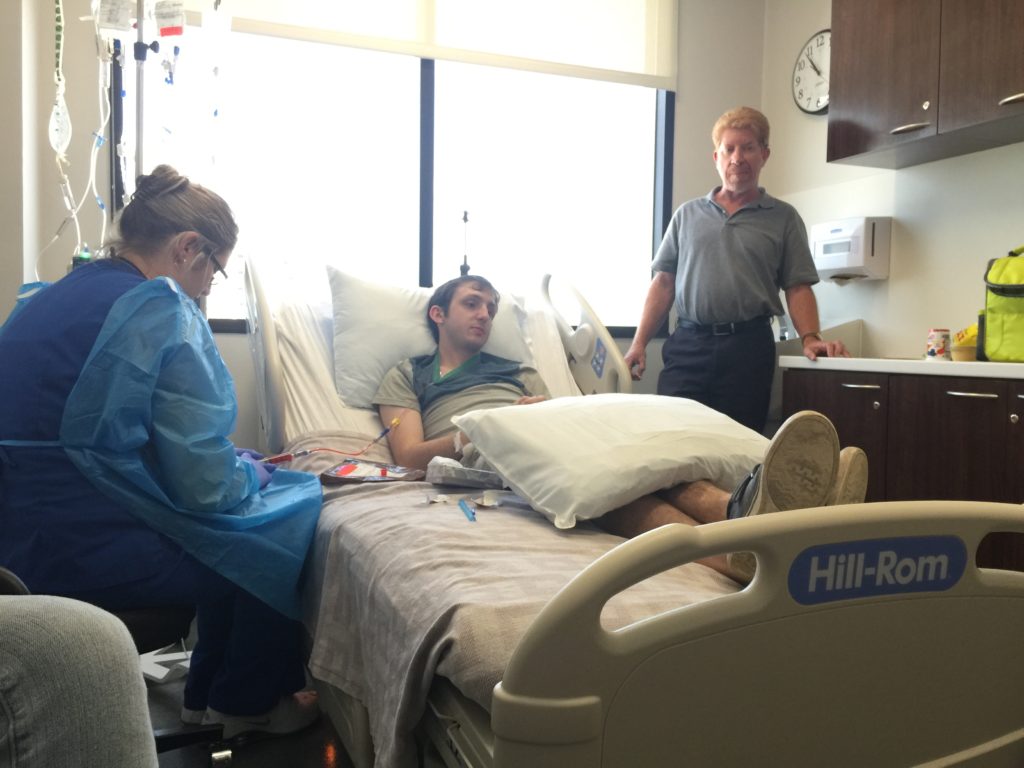 The nurse (allow Nurse Rebecca to demonstrate) puts the saline in, flushes his port and then pulls back to see if “blood returns” out of the port. If there is NO blood return then the chemo could burn his skin if it’s not actually going into his bloodstream. 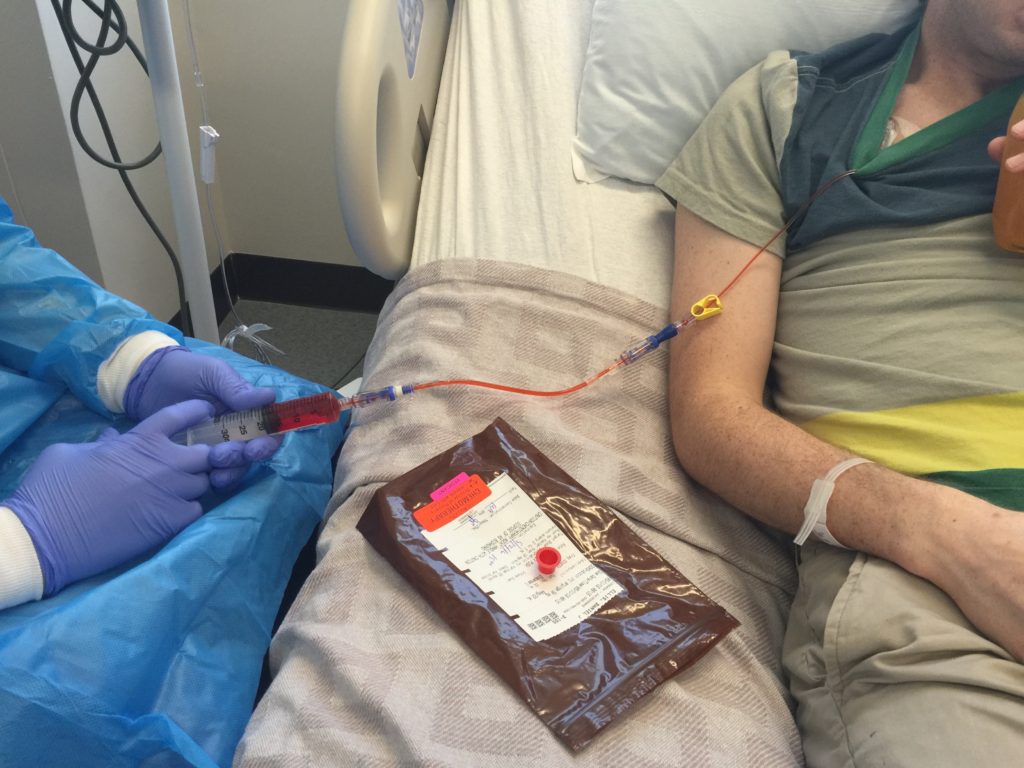 This time when his port was accessed he had sour gummy candy in his mouth to deter the onset of nausea triggered by the smell of the cleaning solution. 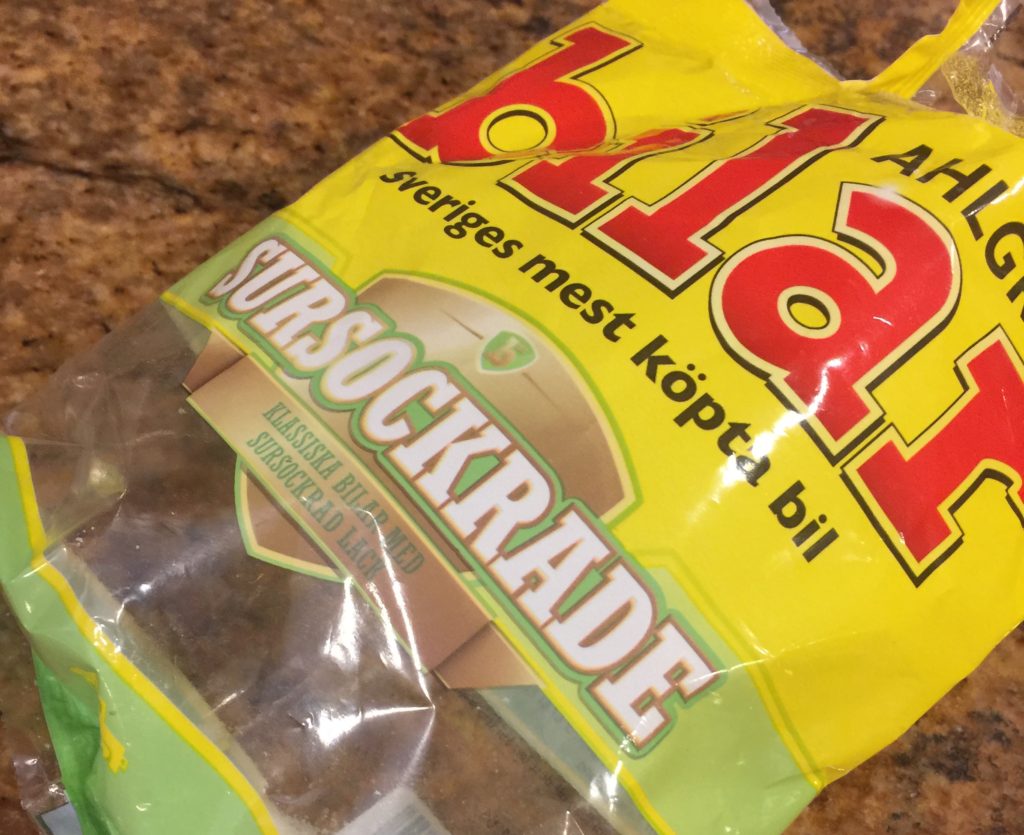 Our friends, Lance and Kathy, from Sweden, were in town visiting and gave it to us. We’ve practically cut out sugars and processed food from our diet, But this empty bag shows how much he enjoyed it. 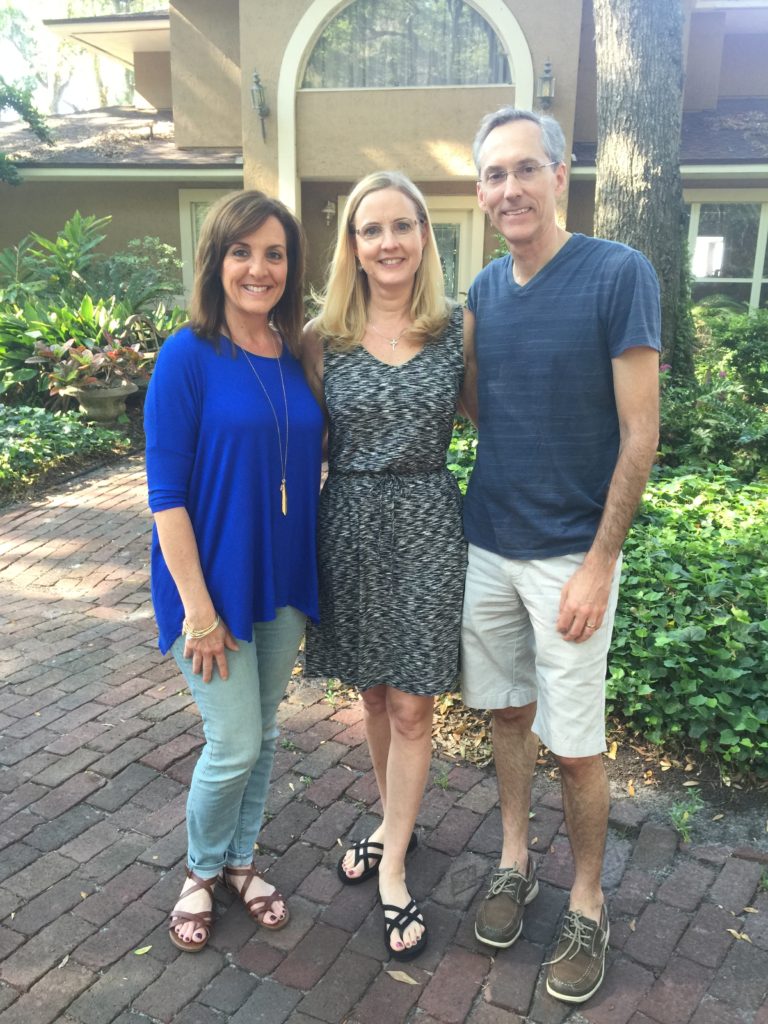 Throughout chemo -and for days after each chemo, he continuously spits into one of these bags. “It tastes like chemo,” is his best description.

Daniel enjoys visitors. Even if everyone’s doing their own thing or the room is completely silent. From left to right in this photo: Gabi’s dad. Gabi, Daniel’s fianćee, Daniel, sister Laura, me, Grandmom, sister Kelsey. 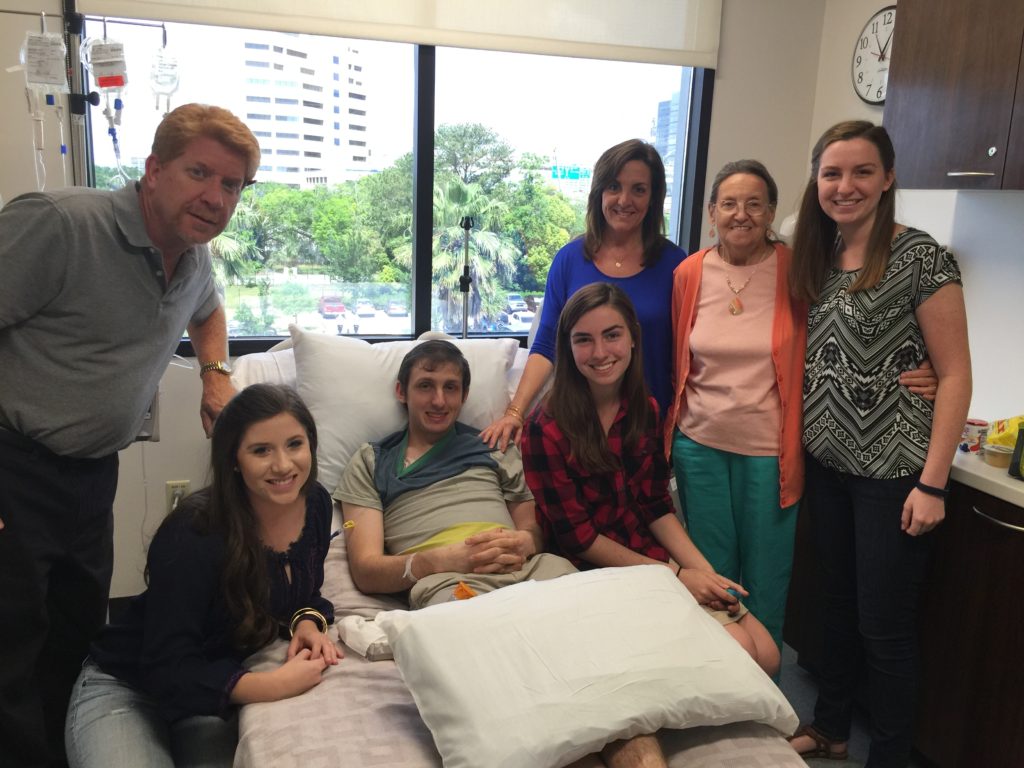 He appreciates his friends spending time with him. This is Nick, his college roommate. His mother is a great friend and fellow blogger. She and I drove to UF to make a meal for these two and their house of sixteen each semester. 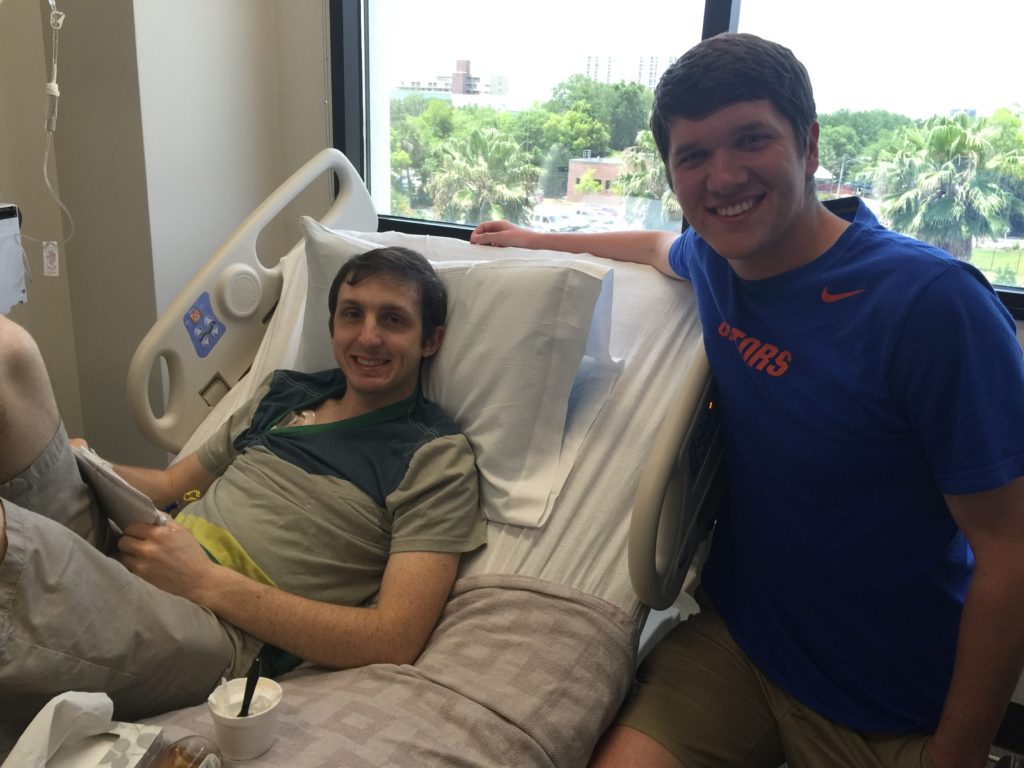 Sometimes he watches sports on TV during chemo. I’m guessing a soccer game was on TV at this moment. 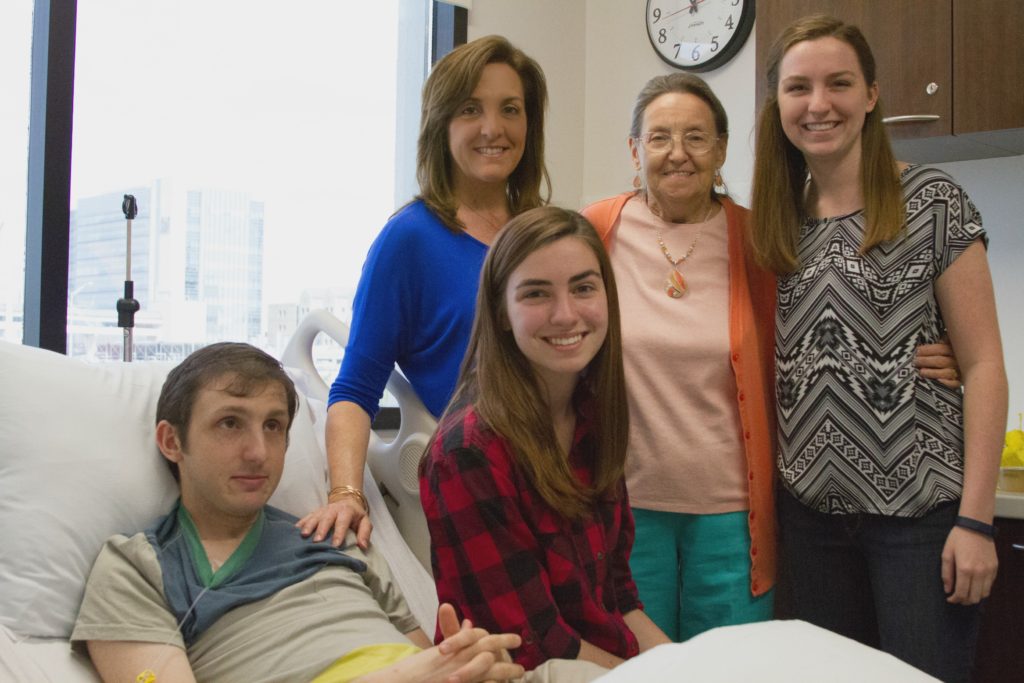 Daniel had three bowls of sherbet and a sandwich and drank several bottles of water and fruit drinks. A fridge/freezer is stocked for patients and guests. Gabi worked on wedding plans, college assignments and kept us entertained with funny videos. My mother brought a book to read. And, I.. well, it looks like I drank some coffee and gave my best pose ever. 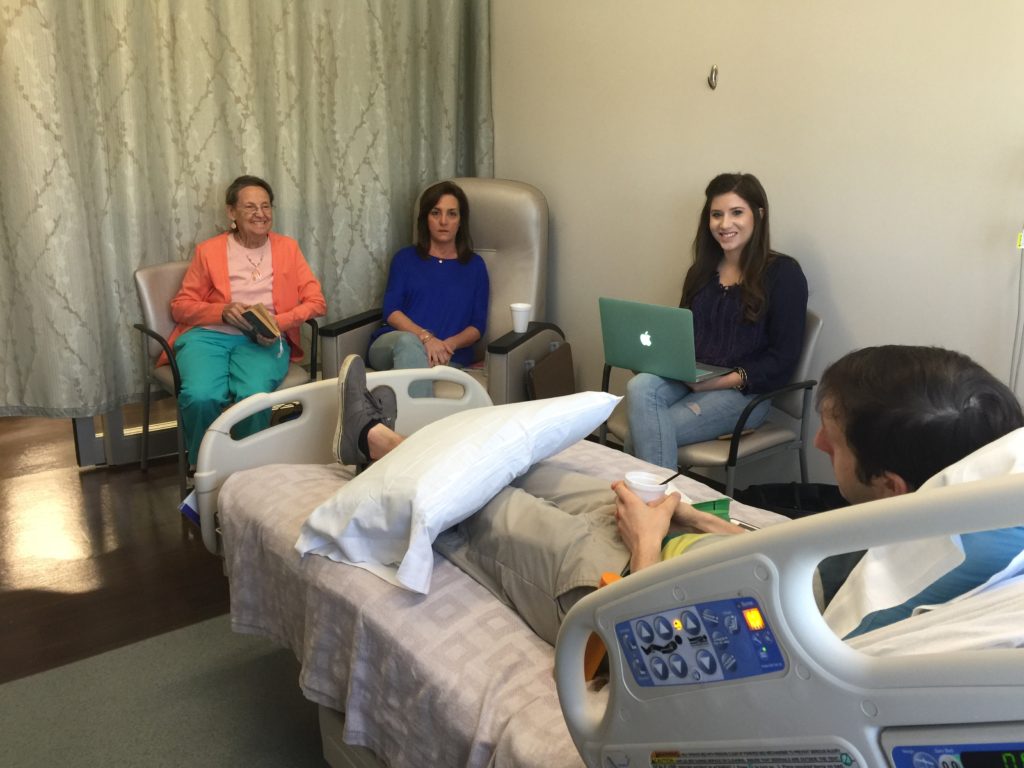 Laura left school during her study hall and lunch break. #havecarwilltravel. She ate her own bagged lunch right alongside her brother. 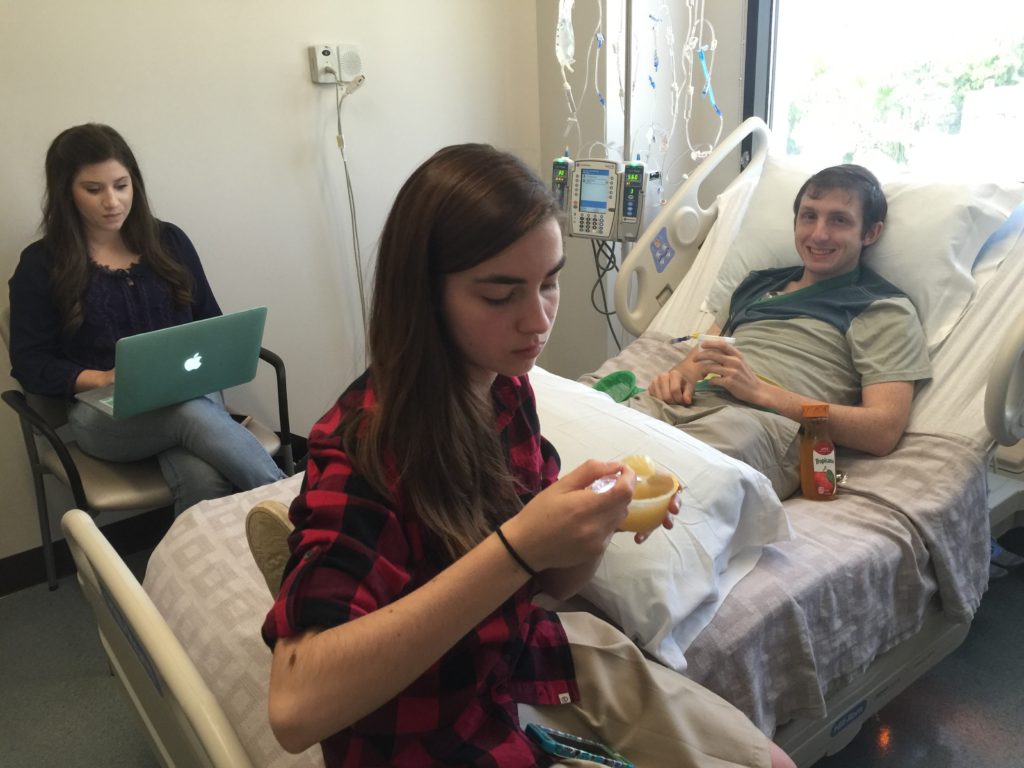 I love it when his sibling’s friends show support. #mamalike. This is Emily, Kelsey’s friend, days before she heads out on a mission trip to Africa. 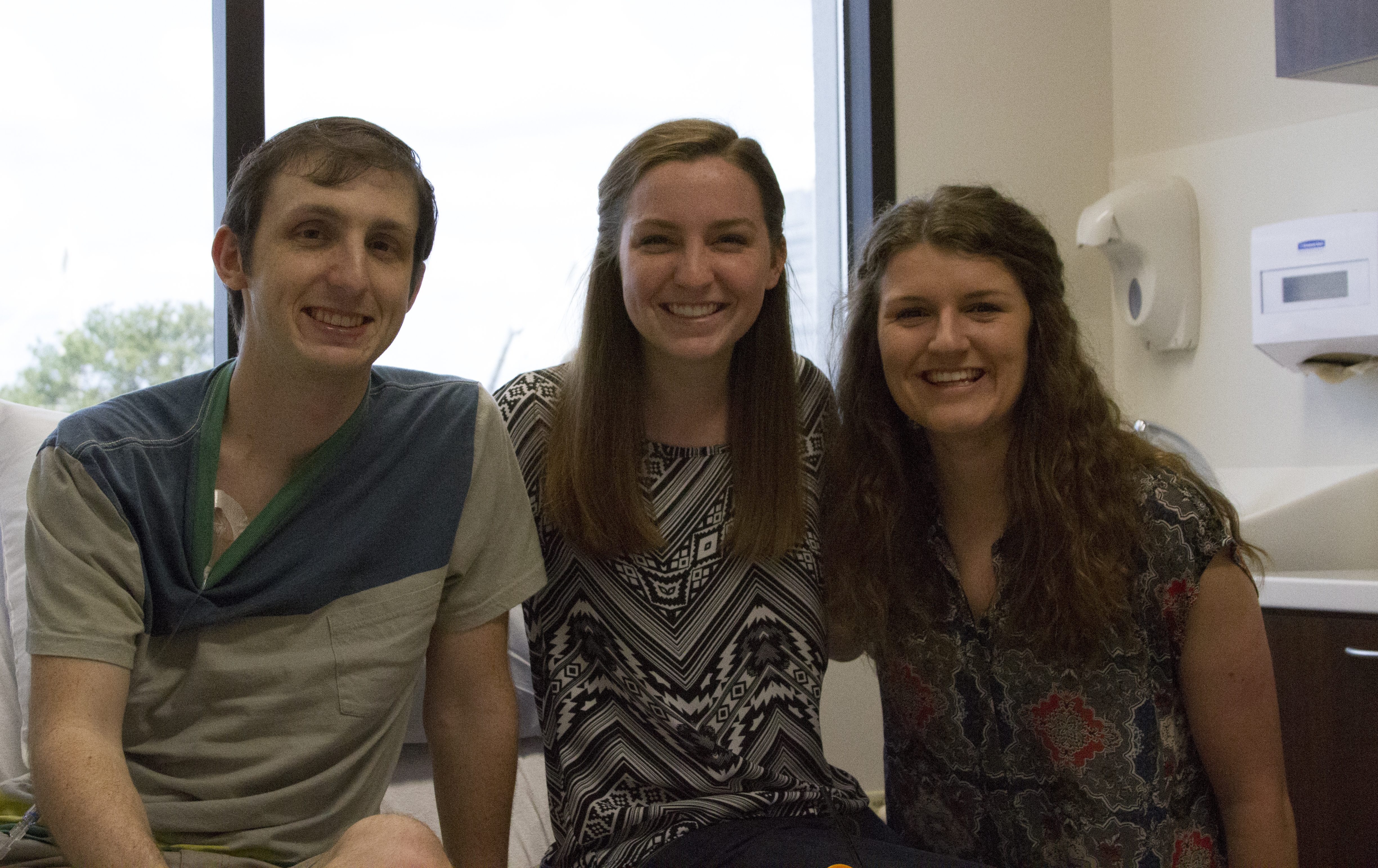 While we’re on the topic of friendships, you can quote me on this:

DON’T MISS THIS. It may be one of the biggest take-aways from this blog post. Intentionality in cultivating friendships.

Daniel’s friend Chris said to me, “I want Daniel to look back and think of his time with cancer as a time he learned to play golf.” So, a few weeks back he began taking Daniel to play golf and teaching him the game. These are Daniel’s friends Joel and Chris. 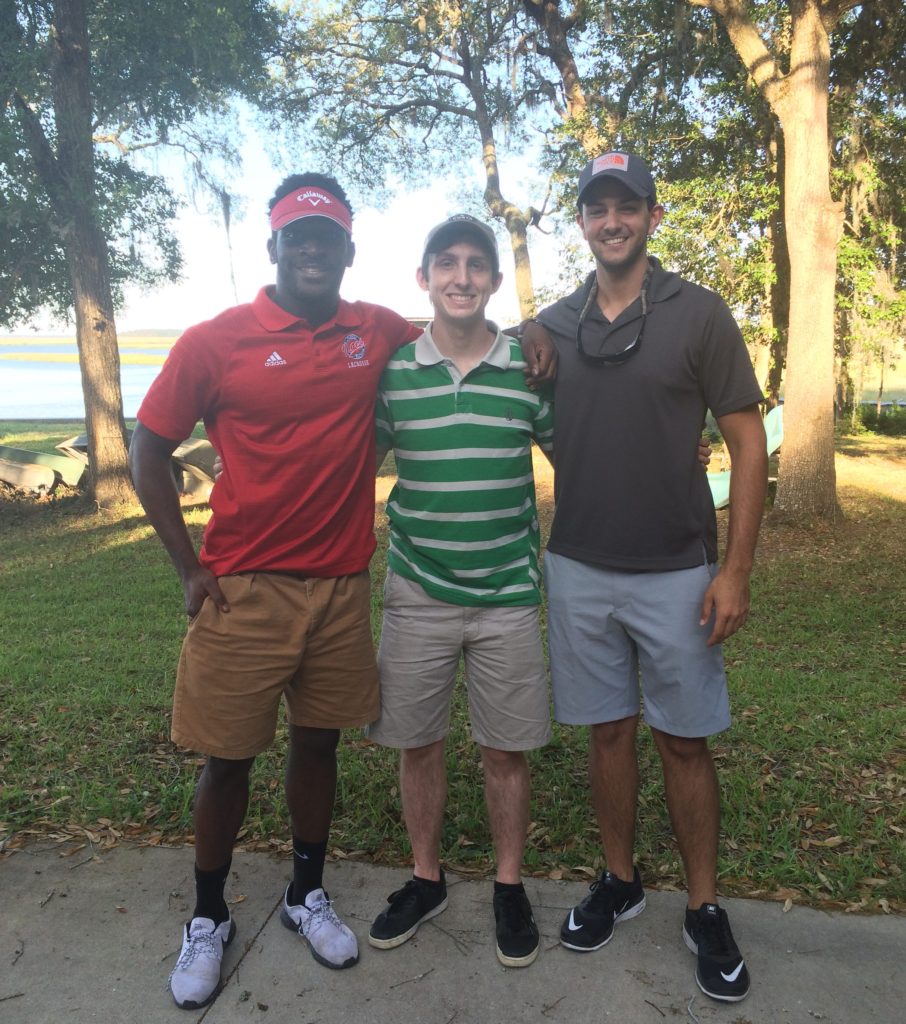 We’ve been at this place for going on six months. Friendships have been made. This is Bob, also a cancer patient, who came to say congratulations to Daniel. Bob has a lifetime on infusions, yet rejoices with others and is always encouraging. #prayforbob 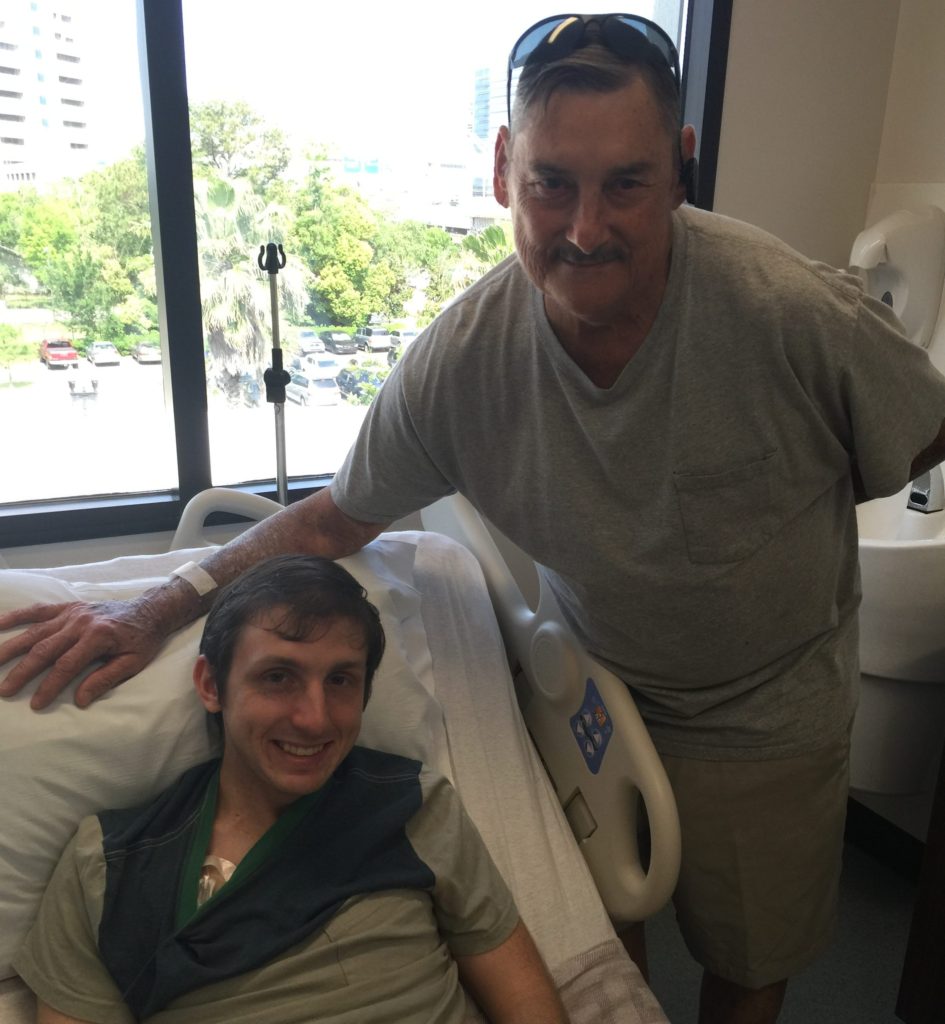 LOOK AROUND YOU. SEE ALL THOSE PEOPLE GOING THROUGH THINGS?  Rejoice with them, Mourn with them, Walk with them. Reach out to them today.  In so doing, you’re sharing in their journey… and that means something to them.  #mamalike

THIS IS NURSE APPRECIATION WEEK.  a great reason to honor them.

Earlier in the week, we made a looooooong banner for patients and caregivers to personally write thank you’s. (see more HERE) 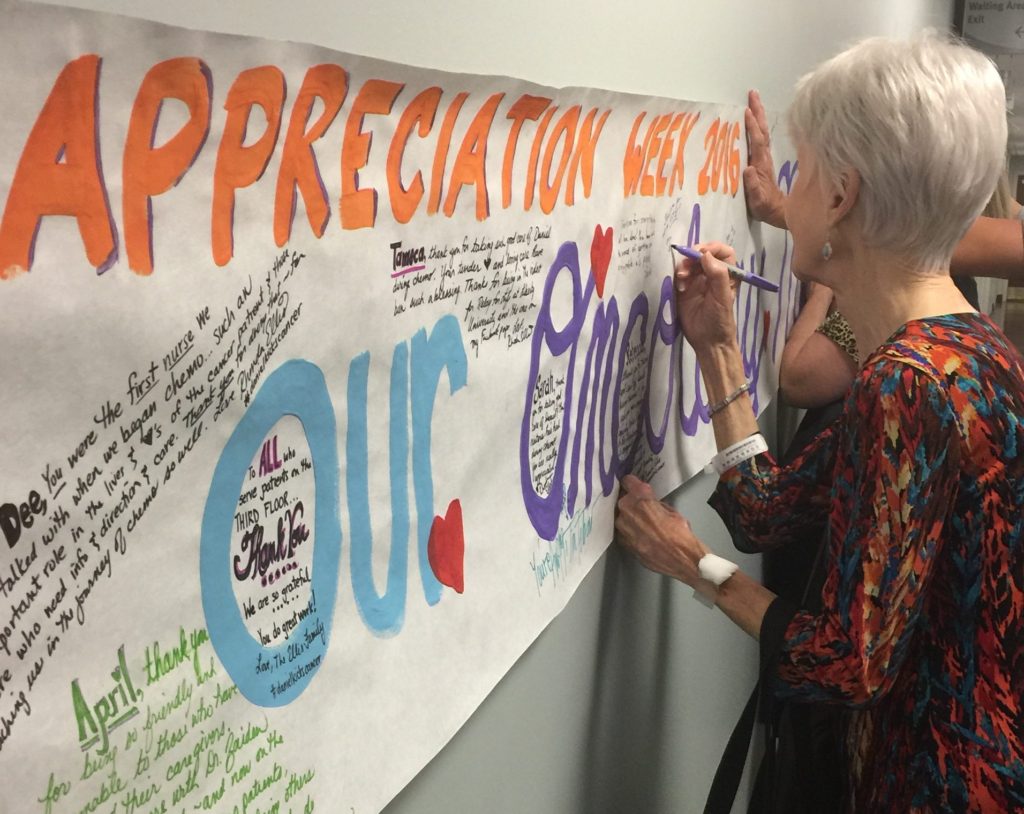 And, even though he hasn’t felt well, it was important for Daniel to honor those who have been caring for him, so he joined us in bringing a Nurse Appreciation Week celebration to them. This is Michael who is attentive and friendly… and tall. 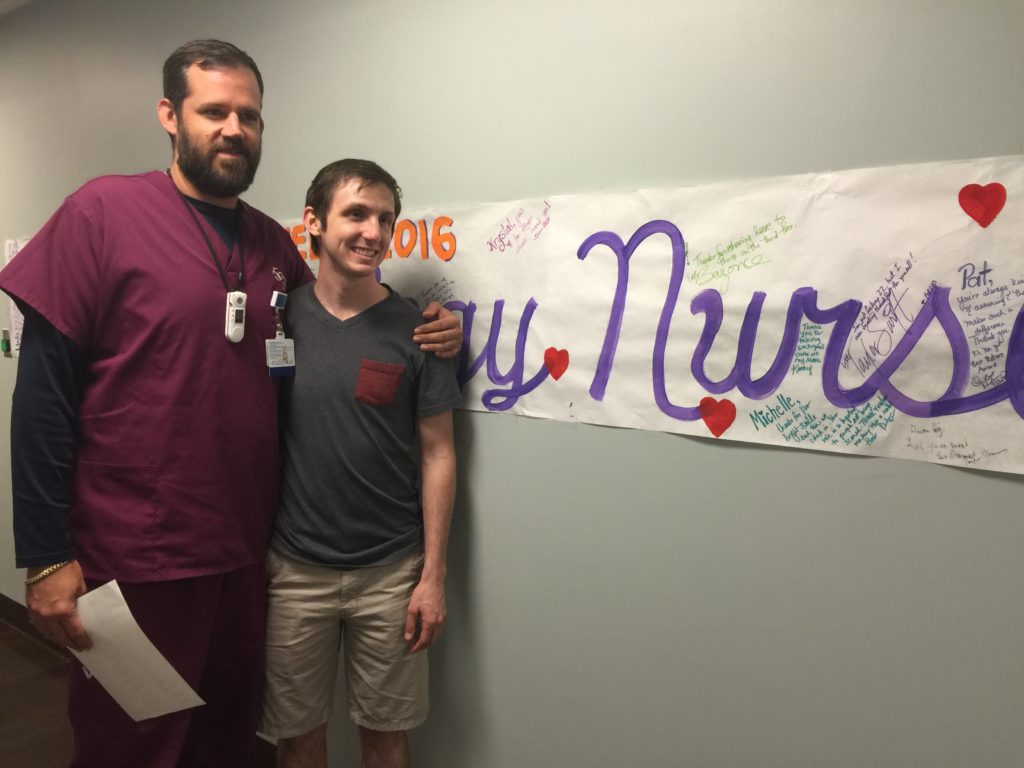 Yesterday, we had a NURSE APPRECIATION CELEBRATION for the chemo infusion staff.  We provided lunch, desserts, and drinks for the chemo infusion staff. Chick Fil A donated boxed lunches containing a chicken sandwich, cookie, and fruit bowl.  We had friends join in by donating money towards a large basket of goodies. Kids made cards, and a friend packed up pedicure products because the nurses are on their feet all day. 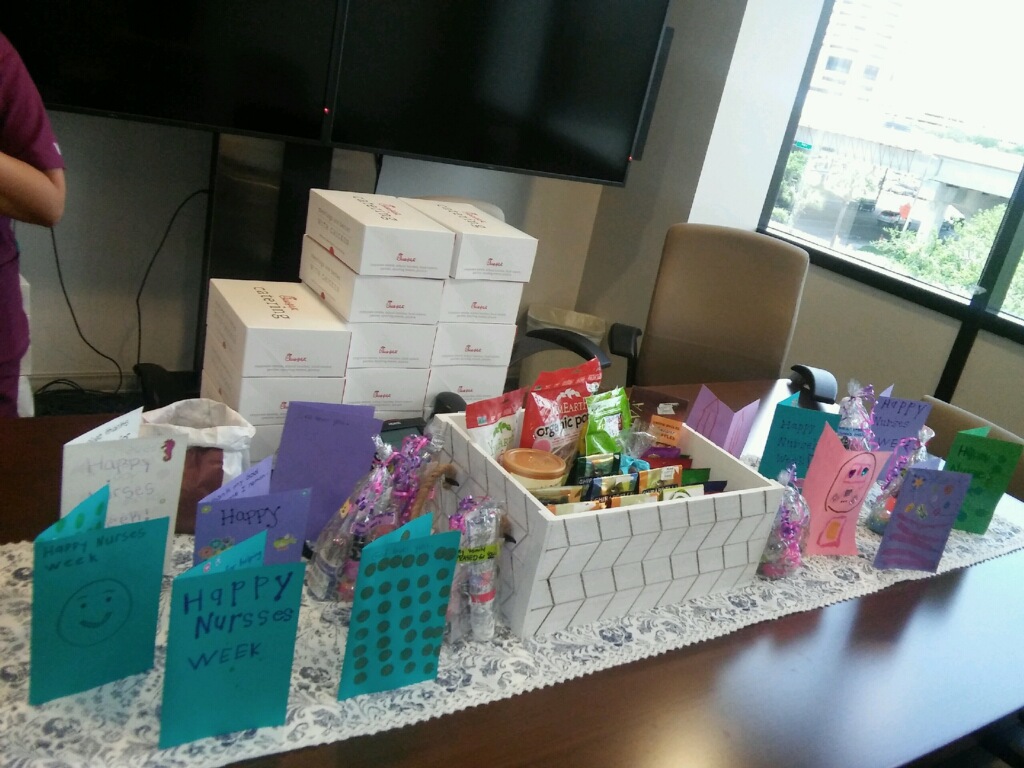 See all the photos and staff we honored for Nurse Appreciation RIGHT HERE.  Thank you to all at MD Anderson.

As we left chemo today, a beautiful young mom named Moe, also battling Hodgkins Lymphoma, approached us. She recognized us from my blogs that her aunt (in law) had shown her. Isn’t that neat! We haven’t seen Deborah in thirty years, but keep up on social media. Deborah describes Moe as joyful, creative, crafty, strong in her faith, and a wonderful nurse at a children’s hospital. #prayformoe 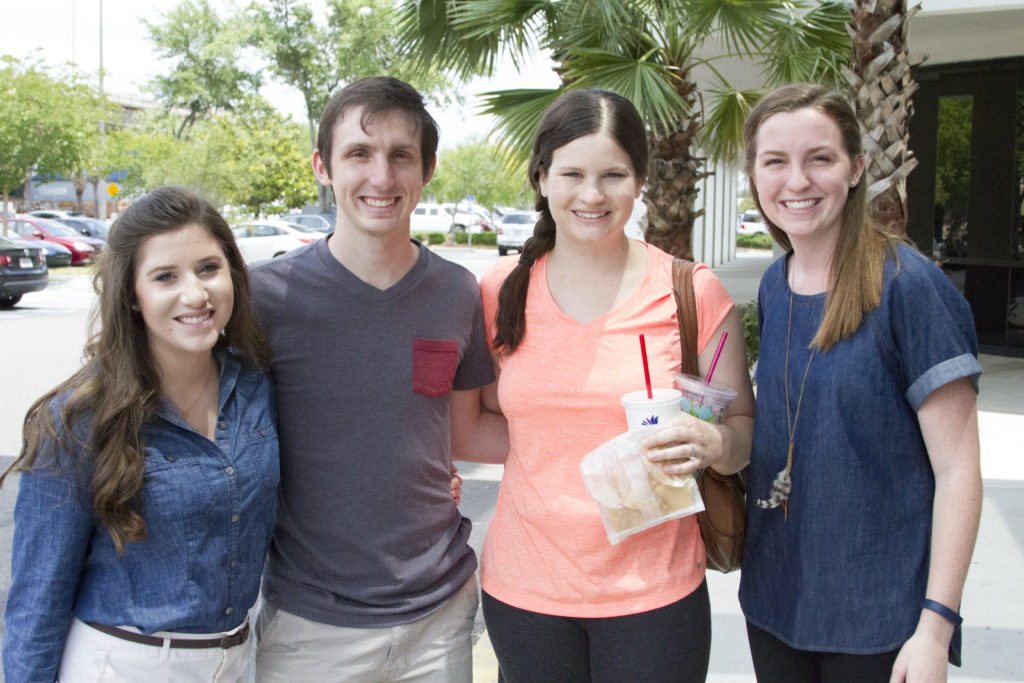 Thank you for sharing this journey with us by following this story and through your continued prayers for Daniel, me, our family, Gabi, their wedding plans… and for being intentional to pray for and BE THERE for those you know battling cancer or going through any difficulty.

Do that random act of kindness that popped up in your head while you were reading this.