You are here:
September 15, 2015My JourneyBy Rhonda Ellis 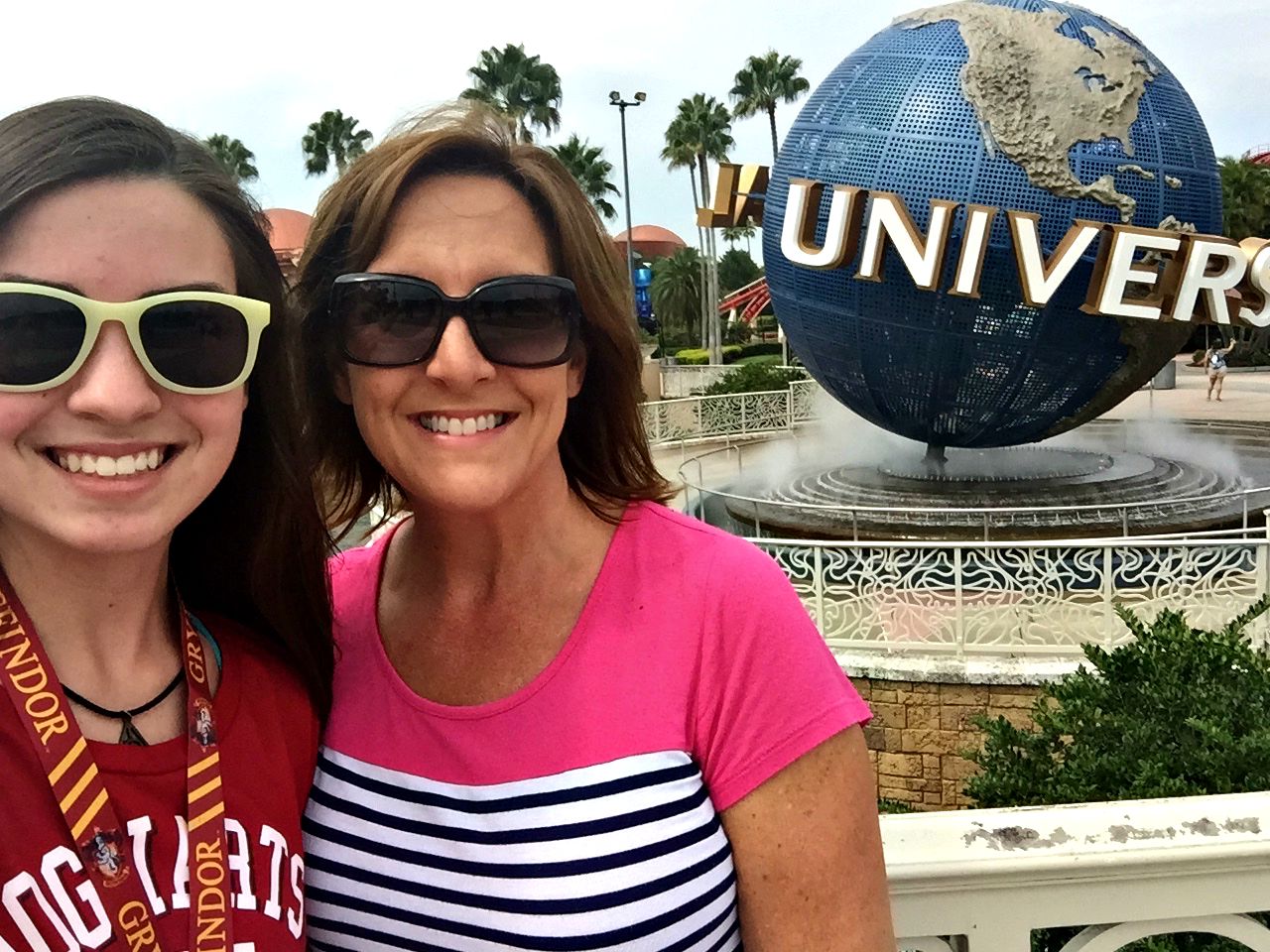 My daughter Laura just returned from five months in Brazil. A week before returning home she turned 16. She had two main items of fun to immediately tend to that were top on her list. Get her driver’s license and go to Universal Studios to see their new attraction, Harry Potter World.

She was disappointed to learn that we would require more actual time behind the wheel. And, as for the trip she so desperately wanted, there simply hadn’t been a full day available.

A trip to Universal… just the two of us. You can imagine the anticipation.

We set our alarms and planned to leave as early as it took to arrive when the park doors opened.

You see, I joke that my middle name is “U-turn.” For good reason, you understand. I often turn the wrong way, and make u-turns even when being navigated by the GPS.

We’d been driving for oh, an hour and a half or so. Picture this. I’m using this precious time to calmly mentor her in driving skills. You know, important things – like being an observant driver who notices road signs and being aware of the direction being traveled. I used real life situations while driving to teach important principles – like when we passed a car stuck in the soft soil in the median, I said that we often make poor choices when we panic. I shared funny stories about my driving over the years. It was a lovely time, until I realized…

We’d been going the wrong way!

FCOL! (For crying out loud!)

Okay, seriously… from my home to Universal is basically two main highways. That’s it! How in the world could I have been pointing out being perceptive of interstate signs and not realized all the while I was pointing to signs of roads we shouldn’t have been on!

I didn’t tell her this yet. I just quietly plugged in Universal to my GPS and we turned onto a country road I’d never been on… and then another… and another… Then I thought I’d reset the GPS because SURELY it was wrong. There had to be a faster way.

To my surprise, the updated one said we were 4 hours and 55 minutes from our destination.

I had her pull over into an empty parking lot. I got out and called my husband and then a torrential downpour happened… and, not from the sky, you understand. From my eyes!

I’m sure the pressure was self-inflicted, having a desire to make this an extra special outing for her and feeling so incredibly dumb.

I was proud of my husband for calmly handling my hysteria, especially when he can’t possibly relate to the directionally challenged mind. He’s the kind that knows the mile markers and every landmark. He says the key is to be observant. (No comment.)

FYI – Later that night, I told him thank you for being so kind on the phone… and then asked if he’d secretly had a good laugh about it with the guys at work. He said yes.

Back to my story.

There I was in the parking lot, sobbing, feeling the pressure of ruining the grand plans. Unaware, Laura had gotten out of the car and beheld my tears.

She asked what was wrong.

She did something that was actually quite extraordinaire. Something that should be our first instinct when a loved one is discouraged.

She didn’t get upset, blame, or correct me. She resisted any possible urge she may have had to laugh. She just held me. In so doing, her comfort and tenderness fed into my emotional well-being.

“Do you want to just turn around and go home?” I asked. Quite frankly I was hoping she would want to go home. I mean, I had a headache from doing the ugly cry, and thought it would be better to go another day when we could arrive promptly when the park opened.

To my surprise, she did what I later discovered was a second key component to me staying the course.

Her attitude impacted mine. Her calm tone soothed me. Her unwavering response gave me confidence. In that short phrase said so assuredly, my focus changed from wanting to throw in the towel to “Okay. We’ve got this.”

We got back in the car. She entered the destination into her GPS. “Mom, my phone says it’s two hours and 20 minutes from here.”

I reset mine again. This time mine also said two hours and 20 minutes” even though we were still in the same spot where it previously read 4 hours and 55 minutes. Baffling. (Yesterday, I found out sometimes when the GPS resets, it gives the total time of the trip from the first point of departure to the final destination.)

We were on our way again. As we drove I pondered.. I thanked the Lord for Laura’s hug. I thought about how her response actually altered my state of mind. I reflected on how her reaction in action, words, and even demeanor caused me to keep going.

I wondered about my own immediate reactions to others who may feel discouraged, defeated, or off-course.

I want my actions, words, and even my demeanor to encourage and give strength to others to keep going. Laura driving through the country… a far cry from the correct route. My bad. We had a spectacular time, just the two of us. When it rained, we bought ponchos and kept going. Fun memories! She bought this for her friend, whose uniquely spelled name is rarely found on novelty items.