The Out of Control Lady at the Drive Thru Window 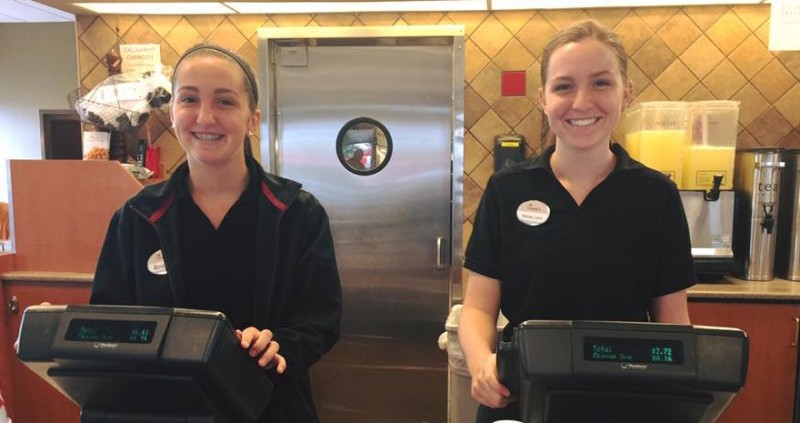 These two employees are amazing, but this story isn’t actually about them…although they were witnesses in said story.

A few of my daughters work at a fast food restaurant. It’s common, while gathered around the dinner table, to hear their stories of the day’s events.

This one story, thus far, has been the dooziest of ’em all. So much, in fact, that I give it the Doozy Award. (which isn’t actually real, so don’t google it.)

The Out of Control Drive Thru Customer

Just as is customary at fast food restaurants, a lady drove up to the outdoor menu board and placed her order. She then pulled up to the drive thru window for the requested items to be promptly handed to her by a smiling employee. Which it was… except…

As the employee was reaching through the car window to hand her the large sweet tea, she bumped the drink, the lid came off, and the drink completely spilled all over the woman and her car.

The employee, who was a team leader, profusely apologized. My kids witnessed her even saying, “That was completely my fault. I take full responsibility. I’m so sorry.” She offered free food and coupons.

I think we all agree – we wouldn’t want to be either at that moment.

When the customer was given her replacement drink, along with another apology, she reacted in a way I’ve never heard happen before.

She took the lid off… and slung the entire contents back through the drive thru window, splashing the employee, the counter, the floor, those around her, and even those working in the kitchen.

She angrily yelled, “Now you know how that feels!”

I can’t help but see beneath the outward actions to her character. I mean … lack of character.

Accidents do happen. Just yesterday a friend posted on Facebook about a waitress spilling a cup of pancake syrup on her little girl’s head. She described it with humor and grace.

What character quality separates the Doozy woman’s response from others who have also experienced the inconvenience or embarrassment of an employee’s mistake?

Self-control is a learned behavior. It’s recognizing our hot buttons and bringing to a halt the potential reaction while in the mind. It’s discipline to think before reacting. It’s considering the other more important than self. It’s putting off anger and in its place, putting on grace. It’s giving others the benefit of the doubt. It’s doing differently than you FEEL like doing. It’s showing love. Having self control is wise living.

A fool gives full vent to his anger, but a wise man keeps himself under control.  Proverbs 29:11

How do you handle situations when you’re wronged? What’s your response when embarrassed or inconvenienced?

Because when you admit and “own” your part, self-control can be learned at any point in life… Even if you grew up in a home without it.

If you’re a parent, make it a priority to teach self-control. You could read this story with your kids and have a dialogue on self-control. Further discuss customer service, self-control of the employee, and even… if you become aware of any areas you’ve lacked self-control, share it, and if towards your family, apologize. Now, THAT’s, mentoring your kids – showing them a teachable and humble heart, open to be continually transformed into the image of Christ.