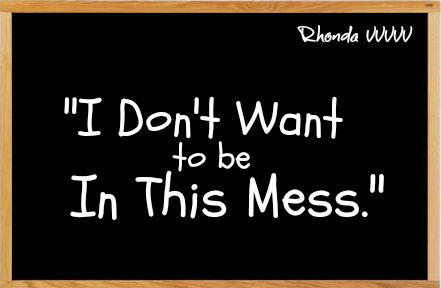 As a fifth-grader I would have just died if I was in the spotlight. My assigned seat at school was directly behind the Johnny Carson of ten-year-olds, always making a quiet joke under his breath, without so much as a smile. On this one particular school day, we had a substitute teacher, and “Johnny” mumbled a cutting remark that cracked me up.

Hearing my laughter, the teacher stopped writing on the board, turned and looked directly at me. “What’s your name?” All eyes were staring at me as I had now become the center of attention. I quickly replied, “Rhonda.” She madly wrote my name onto the upper right hand corner of the blackboard. I was dying of embarrassment, yet I blurted out, “I don’t care.” (AHH! I did care. Why did I say that?) She put a check mark next to my name in response to my disrespectful comeback. Again, I quickly and brazenly replied, “I don’t care.” Inside I was thinking “What is your problem? You do care.” This standoff continued, with my flippant retorts and her string of checkmarks. From the best of my memory, these checkmarks wrapped around the entire room of wall-to-wall chalkboards. Okay, not really, but I certainly did not know how to get out of this mess.

Over the years, I’ve thought about what would have made me react so out of character. And, why, for crying out loud, did I allow this situation to become such a big mess? All I had to do was say, “Yes, Ma’am” or simply stop laughing and say nothing.

I saw this same trait of unnecessarily getting deeper into a mess in one of my kids. The common thread…stubbornness. Her lack of self-control and then refusal to acknowledge her part prevented her from ending the madness. I thought back to my fifth-grade experience and pondered on the similarities between her and me. What could I do to “train ahead” to equip her with the skills needed to get out of a mess.

So, a simple phrase was born…and lives on today.

I explained this phrase by giving my personal example of my name being written on the chalkboard, and me reacting with words I didn’t even mean. “I was in a mess and didn’t know how to get out of it,” I shared with the kids during our devotion time. If I had recognized that concept back in fifth grade, I would have realized the way out was simply to acknowledge the correction and stop my behavior.

I talked with the kids about this phrase and how it could be used when they find themselves in a situation they don’t want to be in. I gave this example:

This simple phrase has been a blessing and has been used by all of our children – and even us, as parents, when we find ourselves in situations that we’re heading nowhere fast.

I remember being in the laundry room, folding clothes, and our youngest – about four at the time- pushed the door open, came right up to me and said, “Mom, I don’t want to be in this mess…”  She had been having a temper tantrum and I had her sitting in another room, calming down before I was ready to discipline her. I welcomed her phrase, hugged her. She had soft shoulders and was repentant. No further discipline needed.

My teenagers have used this when their attitudes have been disrespectful. “I don’t want to be in this mess,” is said with a sheepish grin, followed by admitting their part of the situation and asking forgiveness. Restoration happened. I always make a point for physical affection and verbal affirmation, letting them know they’re loved and that I’m proud of them.

I’ve personally used this with my family after being ugly to them, and finding myself being so prideful and stubborn that I let time pass before apologizing. “Okay, family. I don’t want to be in this mess. I know I was wrong for being disrespectful and hurtful with my words. Will you forgive me?”

Here’s an easy reference guide to help us stop dead in our selfish and stubborn tracks:

Seriously. Do this enough times, you’ll think twice before letting something become a big mess. But, when it does happen, “I don’t want to be in this mess” is sure to help.