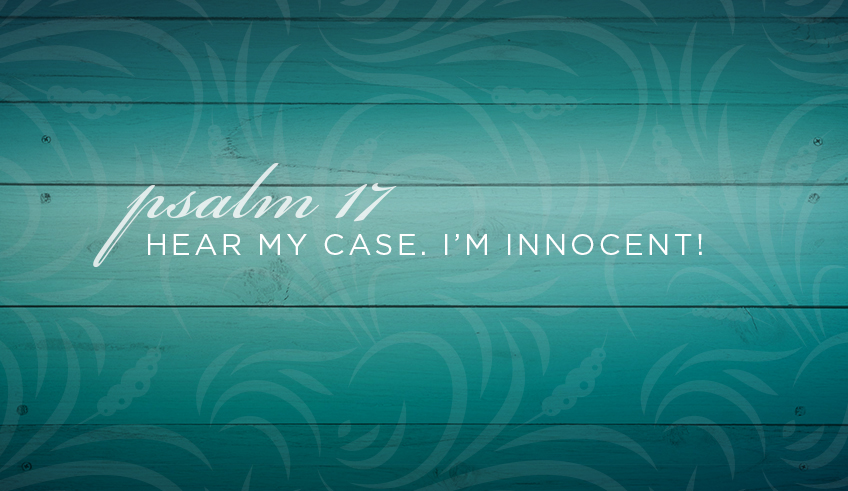 What should we do when we’ve been unjustly accused of wrong and want our innocence made known?

In this Psalm we read David’s words to God concerning how he has been wrongfully accused by an enemy. He has been greatly hurt and is grieving deeply. I’m talking weeping and serious lamenting. Have you ever felt that way? Me too.

“Hear my just cause, O Lord; attend to my cry!” David boldly pleads his case to God, as if he’s being heard by the most powerful judge in the highest courtroom in the land.  And, that he is. He pours out his soul and the whole scenario, detailing all of its injustices, to the only true and righteous God. I can relate to this as well. Can you?

He craves justice and wants his innocence to be made known.  He wants God to expose their sin and hurtful actions and make known his innocence. We do just that too, don’t you agree?  I know I’ve felt the sting from undeserving slander and brutal actions. I’ve pleaded with God about the whole scenario, giving a play by play report from my perspective, claiming my innocence, detailing the attacker’s every move, asking for my vindication and for God to deal with the mean-spirited, falsely-accusing attackers. I’ve also experienced the beautiful freedom of no longer even wanting my reputation cleared, as I’ve entrusted even that with God. There’s peace in trusting God with the whole process.

David fears his enemies and he yearns for safety and protection from God. “Keep me as the apple of your eye; hide me in the shadow of your wings…”

David’s words to God reveal these longings of his heart.

Perhaps in our cries to God we are really longing for these same things. David took his grievances to God. So should we.

It is there in the intimate conversation with God, that he sets free our mind consumed with revenge, breaks the chains of bitterness, confirms his role as judge, shows us his love, offers his safety and protection, transforms our hearts. and strengthens our trust in Him.

Look at how David’s heart was transformed within just this one Psalm.

We would be wise to follow David’s example when we are innocent of hurtful accusations and crave justice.

Tell God all about it. The good, the bad, the ugly. Examine our own hearts for any wrong-doing on our part. Invite God to reveal any areas we didn’t see. Declare our trust in him as The Righteous Judge. Experience the renewed heart, no longer desiring vindication or revenge, no longer consumed with justice brought to the accusers. Walk confidently, knowing you are safe and protected by God Almighty. When we release all of the poison in our thoughts to God we are no longer held captive and experience peace and freedom. Even David’s desire for his innocence to be brought to light was released to God… and in exchange, he had contentment, confidence and peace with God in control. Yeehaw.

Dear Lord, I pray for ____ (specific child, friend, spouse, self) to go to you when falsely accused, trusting you are at work in his heart and in the lives of all involved. May he release his desire for revenge and vindication, trusting you as Judge. May he experience the unexplainable peace that passes all understanding when he has been wronged but has released control to you. May his life bear fruit of you at work in him, pointing others to you.