Chemo Round Eight included a few firsts for us. Daniel discovered a surprising remedy for nausea during chemo. We were intentionally chickenless. And I went off-site to check on someone who was injured at our home. Allow me to explain… Come. Peer inside our #danielkickscancer journey, as seen through the eyes of me, his mother. 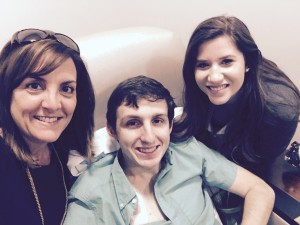 Today began with a visit to Daniel’s medical oncologist who reviewed the bloodwork and gave a good white blood cell count. The shot of Neulasta following his last chemo had boosted his counts, which of course we are so grateful to hear, but along with this shot are side effects like achy bones and flu-like symptoms. Daniel had felt badly for three weeks – and actually, I’m not sure what to attribute to the low blood cell count and what to blame on the effects of the shot itself. The oncology visit is also the place to ask questions, so Daniel inquired about the disgusting taste in his mouth and his trembling fingers. Dr. Zaiden answered and also chatted about soccer and wedding plans. He commented on Daniel’s hair. He had anticipated it would be gone before the third chemo. 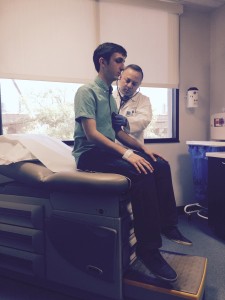 After the oncology appointment, we went directly to the chemo floor. As usual, when the nurse began to clean Daniel’s port, he turned his head to avoid the sight and smell of the cleaning alcohol, a definite prompt for his nausea and frequent use of the spit bag. (Sorry about using a non-medical term.)

Daniel, his fiancée Gabi, and I had the normal shared moments of calm, mixed with discussions on life, current events, sports, families, and wedding plans. Gabi had invited me to her private Pinterest wedding board, so seeing her wedding day vision led to lots of fun chatter. In case you’re just joining us, Daniel had purchased the engagement ring the night before finding out he had cancer. He held onto it, processing his diagnosis. About three weeks later, he proposed in this lovely setting with his sisters dressed in camo, hidden in the woods. This picture is the for real, live moment it happened. We’re super excited about the wedding… coming this Fall. 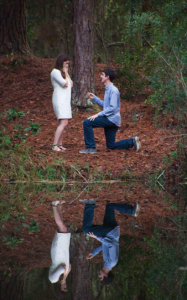 The chemo floor has a coffee station, snack area, and several refrigerators for patients and guests. I grabbed a few coffees, sodas, and a water, then returned. Perhaps a break-through happened. Daniel doesn’t like coffee, but for some reason he reached for the coffee, held it to his nose and slowly breathed in the aroma. The whiff of coffee helped deter the nausea. He kept Gabi’s coffee the whole day and periodically, to avert oncoming queasiness, would pick it up and with intensity, slowly inhale. Even on the ride home, his now-cold cup of coffee was in hand. At the next chemo, we’ll see if this theory still holds true. I actually think Gabi’s hoping he’ll end up a coffee drinker. I’m guessing she wants a Keurig on their wedding registry.lol,) 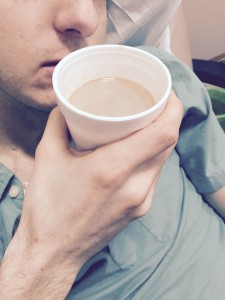 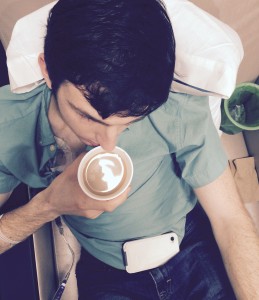 As you know, Chick Fil A has generously donated up to 50 chicken sandwiches, nuggets, or biscuits to us to share during each chemo. Today, for our first time, no CFA pick-up happened. When certain smells become associated with chemotherapy, it often results in a disdainment of that item. For Daniel, the car ride there with the aroma of fried chicken began to be one of those triggers. And, let me tell you. CFA holds a place near and dear to his heart, and we did not want to risk this association being permanent. He and siblings have dressed up like cows for years, racing around town to get free chicken for the day. And, even in college, he and some of his 15 college housemates, on several occasions, had camped out overnight at Chick Fil A grand openings to be among the first 100 guests, resulting in a gift card for 52 free meals each. 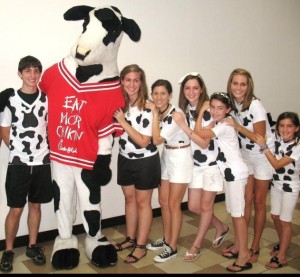 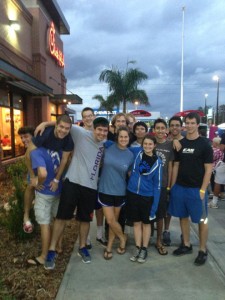 Although we didn’t walk around from patient to patient passing out sandwiches as we have each previous chemo, I still popped my head in various rooms to say hi and get updates. And, some stopped by to see Daniel and check up on him. 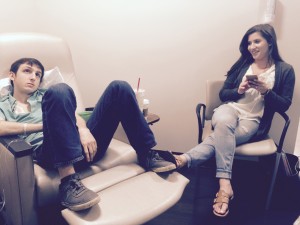 This provided more time for longer conversations, dream-wedding discussions, and normal behavior that down time provides like laughing at and exchanging Snapchat photos of facial embellishments and face-swapping, watching funny online videos that bring out the Gabi laugh and Daniel grin. #mamalike. There were also quiet times where Daniel rested and Gabi worked on wedding plans or did college work. 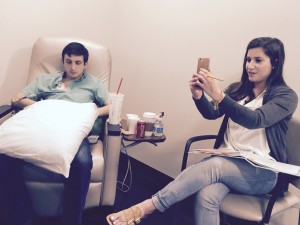 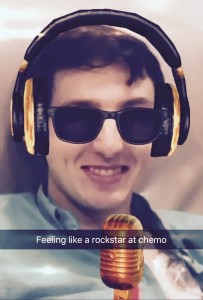 Daniel’s sister Laura was able to leave school during a back to back study hall and lunch break and sit with us for a little while. She loves time with her big brother. Well, she also likes missing school. 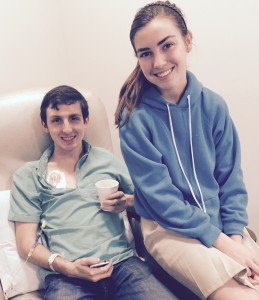 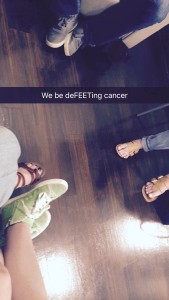 A few days earlier, on the last night of Spring Break, Laura had friends from school over. The kids rode four-wheelers and motorcycles and one ended up being transported by ambulance to the ER. What? #aintnobodygottimefodat. He had a broken clavicle and fractured wrist, each needing a plate to heal properly. He was still recovering in a hospital not far away, so for the first time ever for me, I left Daniel on the chemo floor in the safe care of Gabi, well.. and the nursing staff, and Laura and I drove over to check on Davie and hang up this custom-made by Ellis hands “Get Well Soon” banner that Laura had his classmates sign (along with some very famous forgeries). His parents have been super gracious. We’re all grateful he was wearing a motorcycle helmet and that injuries weren’t worse. You know the first thing Davie said when we opened the door and entered his hospital room? “I’m so sorry… Is the motorcycle okay?” What? 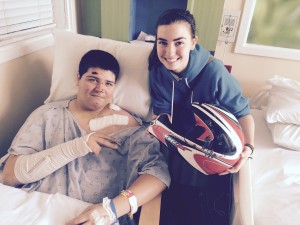 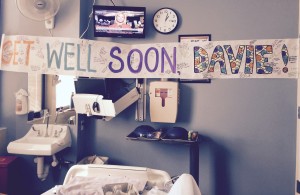 While Laura and I were exiting the chemo floor, my husband was entering with what Daniel seems to enjoy most these days– a cold, extra large fruit smoothie. This time he requested strawberry banana. His friend Chris stopped by. We all really love Chris. 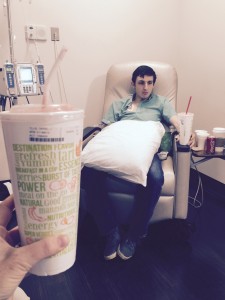 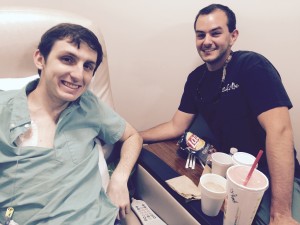 Before leaving the five-hour stay, I wanted to make sure I captured our standard poses: Gabi with Daniel. me with Daniel, and the three of us together. This time, possibly being too “transparent” in divulging this disgusting/funny combo moment- when she leaned in for the photo, her shirt tassel dipped right down into the spit cup. Yuck! But, look what a good sport she was about it. 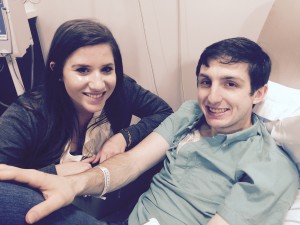 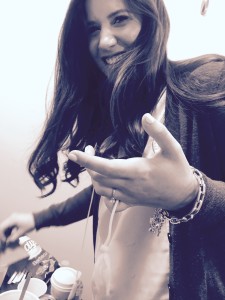 “The spit bag. Don’t leave chemo without it.” It’s been his traveling companion following chemo, using it frequently as the soapy chemo taste built up. A few other commonalities for the ride home after chemo included wanting to sleep and wanting to eat. Today, when we arrived home, he grabbed a blanket and headed outside to the hammock where He also slept, enjoying the warmth of the Florida sun.against his cold spine and shaky limbs. Chemo exhausts him. 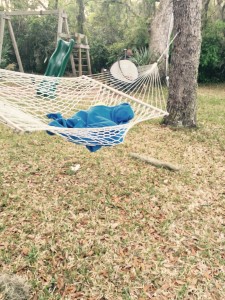 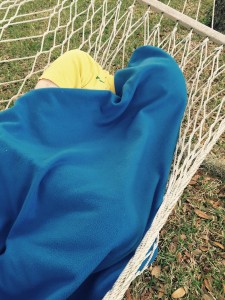 Moments of frailty take my breath away, but quickly I bring thoughts captive, finding rest for my weary mind. I exhale fear and inhale God. I recognize my grip, and release, trusting in God’s plan, and I experiece rest. The weight of worry is lifted as I surrender the desire for control and trust Him. #doyouknowHim

I’d love to hear your thoughts.